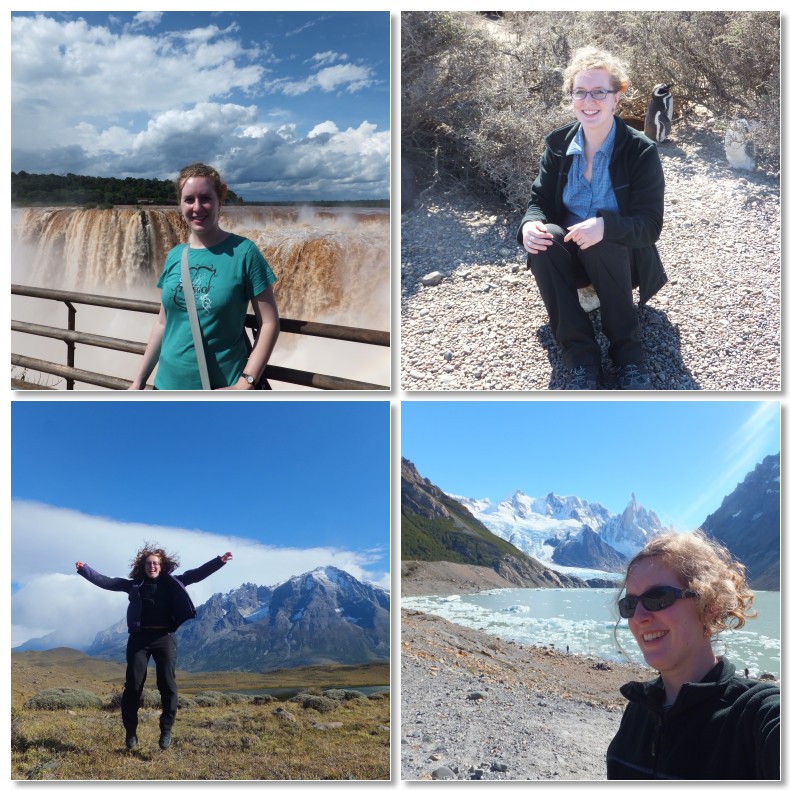 It’s already been just over a month since I started travelling, and I can’t believe that much time has passed!

After a short adaptation phase, I have slowly settled into the routine of my new life on the road and have begun to plan less and less, to travel more savvily, and to meet more and more people.

I am currently staying with a friend in Santiago de Chile – you can’t imagine how good it feels to have my own room and be treated to some healthy home cooked meals after sleeping in dorms for a month and subsisting on empanadas!

On top of that, I finally have a decent internet connection, so I’ve decided to take advantage of it and look back on my first month-and-a-bit in wonderlands!

Where have I been?

I started my trip in Madrid, where I found shelter from the snow in tabernas, museums, and restaurants, before flying to Buenos Aires on my first-ever foray into the South-American continent. Twelve days in the Argentine capital allowed me to explore its many barrios in depth while brushing up on my Spanish.

Then, it was a complete change of scene as I headed to small town Puerto Iguazu, which served as a base for visiting the breathtaking Iguazu Falls from both sides of the Argentino-Brazilian border.

A change of direction saw me fly down to the country’s most intriguing region, Patagonia. There, I spotted wildlife and Welsh descendants around Puerto Madryn, enjoyed the alpine landscape and gastronomy in Swiss-influenced Bariloche, marvelled at one of the world’s biggest glaciers near El Calafate and caught privileged views of the Fitz Roy and Cerro Torre on long hikes in El Chalten‘s national park.

After that it was on to Chile, where I took in the famous Torres del Paine national park before hopping from Puerto Natales to Punta Arenas, where a flight took me to my current luxury accommodation in Santiago!

Number of times I was given the same snack box which serves as breakfast, lunch and dinner on Aerolineas Argentinas flights: 5

Number of times I had to watch Life of Pi on the plane: 3 (and I found it boring enough the first time!)

– Eating lots of tapas and visiting the Reina Sofia modern art museum (for free) in Madrid.
– Walking around Buenos Aires and paying a visit to the illustrious dead in the Recoleta cemetery.
– Taking my first tango lesson.
– Discovering an incredibly cheap art house cinema in BA.
– Meeting Roberto!
– Being filled with wonder at the stupendous Iguazu Falls (photos to come soon!).
– Spotting sea lions and walking among penguins on my Northern Patagonian safari.
– Meeting the ‘Casa de Tounens gang’, named after the super-welcoming hostel I stayed at in Puerto Madryn.
– Being offered my first mate by my friend Patricia on my last night at La Casa de Tounens.

– Rediscovering my love for the mountains (in summer as much as in winter) in Bariloche.
– Coming face-to-face with the gigantic Perito Moreno Glacier.
– Getting some exercise hiking in the Parque Nacional Nahuel Huapi and at the foot of the Fitz Roy and Cerro Torre peaks in El Chalten.
– Being reunited with my new friends Jessica and Debbie in Bariloche and El Chalten respectively.
– Being repeatedly asked if I’m British when I speak English – even by British people. Unbelievable but true!
– Staying in great hostels everywhere (well, except in El Chalten).
– Managing to survive my first month unharmed, which appears to be quite a feat when I hear other people’s stories!

– Remembering why I don’t like classical art in Madrid’s Museo del Prado. But hey, it’s not like I’d paid to get in anyway!
– Having some bouts of loneliness and missing certain people at the beginning of the trip.
– The difficulty in finding good, healthy food in some parts of Argentina.
– Being kept awake at night by heavy dorm snorers.
– How expensive Argentina is! This means I had to miss out on a few unique experiences, including:
* swimming with sea lions in Puerto Madryn
* white-water rafting in Bariloche
* horse-riding
* taking a powerboat ride under the Iguazu Falls
* ice trekking on the Perito Moreno Glacier
Yup, this is all pretty upsetting, but I’m hoping to get another chance to do most of these activities later on in the trip.
– The rain making my 5-hour long visit of the Perito Moreno Glacier a tad lengthy.
– Being unable to sleep on long bus rides.
– Waking up at 5 am for a full day tour of Chile’s Torres del Paine only to be caught in the biggest wind storm of my life there. Coming back from the trip exhausted at 10 pm to find out that someone had taken my bed at the hostel and some of my belongings had disappeared!
– How insistent and forceful Latin men can be – you have to tell them about twenty times that you’re not interested before they give up! They’ll try their best to argue you into fancying them first.
– Getting a ticket for a bus that doesn’t exist and being left stranded at the Chilean border for five hours. Luckily, a nice Chilean couple eventually agreed to give me a ride to Puerto Natales…

The end of March also marked the end of my solo travels in Argentina. The next two months will be spent crossing through Northern Argentina, Bolivia, Peru and Ecuador as part of Tucan Travel’s Andean Trek tour.

I may be cheating a bit by joining a tour, but the Andean Trek is a budget, adventure expedition leaving a lot of room for independent exploration, so I shall not be compromising my freedom entirely!

The tour promises to take in a great deal of South America’s most interesting sites and I can’t wait to blog about my Macchu Picchu trek, Salar de Uyuni visit and jungle excursion. I will also report on the tour itself, review accommodation and give you lots of tips along the way, so stay tuned for the next chapter of my adventures!