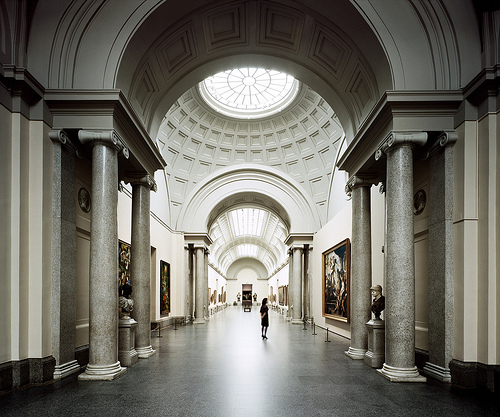 I need to come clean about something: I don’t like classical art. To be more specific, most of it leaves me pretty indifferent, and some of it I actually, actively dislike.

Don’t get me wrong: as someone who draws like a two-year-old, on a purely objective level I really admire the scope and precision of some classical paintings and am in awe of the technique and gigantic amount of work that has gone into them, but the problem is that I very, very rarely find myself engaging emotionally or even intellectually with them.

I wish I could say that my visit to Madrid’s Museo del Prado, the second-biggest museum in the world after the Louvre, had changed my mind, but sadly it only confirmed and reinforced my prejudice.

Let me add a disclaimer: it is of course not the Prado’s fault – the museum has an amazing collection of Spanish and European paintings, including some famous highlights such as Velazquez’s Las Meninas (which I DID enjoy seeing as I had studied it in Spanish class at school!) and a Goya wing which would delight aficionados, but to me it seemed like more and more of the same. Actually, the museum seemed to be intent on proving my point as paintings depicting the exact same religious or mythological episodes were often juxtaposed!

You might wonder why I went there in the first place, especially after having scrupulously avoided all the museums in Rome, which is possibly THE capital city of classical art in the world. Well, for one the Prado is Madrid’s top attraction, and with three days to spare in the city I figured it wouldn’t hurt to check it out. The more prosaic reason is that it was free (more on how to do everything in Madrid for free soon)! I also hadn’t confronted myself to this kind of art – and museum – in a long time and thought it deserved another chance.

The activities organiser at my hostel had recommended I pay for entry so I could spend more time there, arguing that 2 hours wasn’t nearly enough to appreciate the collection… Well, upon seeing the umpteenth depiction of Christ dripping blood on the cross I decided I’d had more than my fill, and was out the door less than a hour after getting in!

So, if you are into classical art I would highly recommend the Prado – and at a reasonable cost of 8 euros you can even pay for unlimited entrance without breaking the bank -, but if you’re allergic to most old art like me I’d say don’t bother (or, like me, pay a free visit to Las Meninas and exit!)…

Tonight however I will be checking out Madrid’s modern art collection at the Centro de Arte Reina Sofia, which I am MUCH MORE excited about. Stay tuned for the second half of my Match of the Museums tomorrow (even if we’ve all guessed the outcome at this point..!)

UPDATE: you can read part two of this feature, with my views on the Centro de Arte Reina Sofia, here.

Do you love classic art and think I’m a complete heretic, or do you, like me, fail to get and enjoy it? Have you been to either of Madrid’s star museums? Let me know in the comments below!

2 thoughts on “Nay and yay: classical vs modern art in Madrid – episode 1, the Museo del Prado”