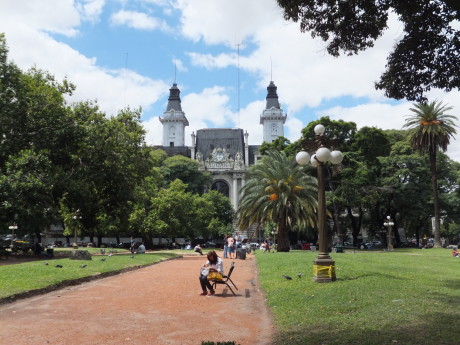 Buenos dias in Buenos Aires: my first days in the Argentinian capital

It had been my long-standing dream to make it down to South America, but when I first set foot on the continent last Friday, it was late, it was dark, and I was exhausted after a delayed, 13-hour flight with Iberia (which, by the way, is not the most modern of airlines – they still have collective TV screens…). So, after a long wait to get through customs and an expensive taxi ride, I was a bit underwhelmed and headed straight to bed upon reaching my hostel.

Things started to look up however when I woke up to a bright sun, blue sky and filling breakfast the next day. I was ready to explore and enjoy everything the Argentine capital had to offer – and that´s exactly what I´ve been doing since then.

On first impressions, Buenos Aires is a really, really pleasant city. I don´t know if it´s the sparing climate, the pleasing architecture or the cosmopolitan atmosphere, but I´ve been finding myself strolling the streets with a smile on my face for three days. I needn’t have worried about the weather: the temperature so far has been almost perfect, hot but not unbearably so, with a light breeze keeping us refreshed.

BA is often described as the most European of South American cities and I can see why: its different barrios seem to draw influences from various parts of the old continent. I am staying in the heart of San Telmo, the old, historical centre which has been turned into a semi-popular, semi-bohemian neighbourhood, full of colonial buildings, cool bars, parrillas (grill restaurants), kioskos (newsagents) and antique shops, in a charming juxtaposition of old and new. 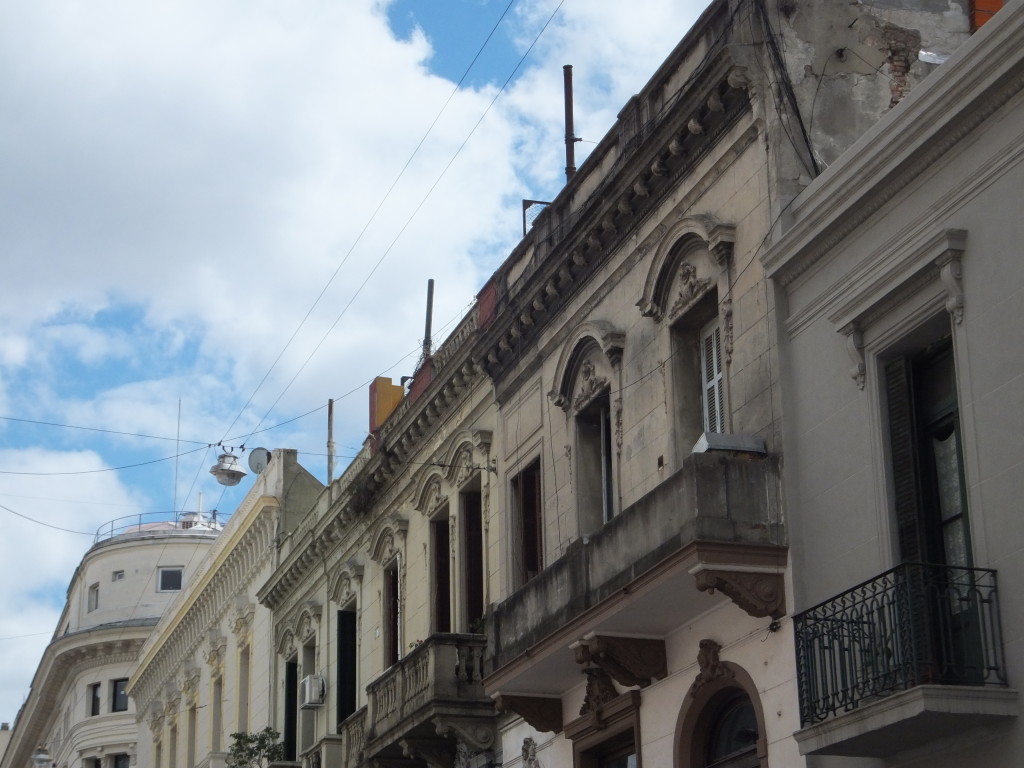 A lot of the buildings’ facades are adorned with street art (or graffitti, depending on your point of view!) such as this one: 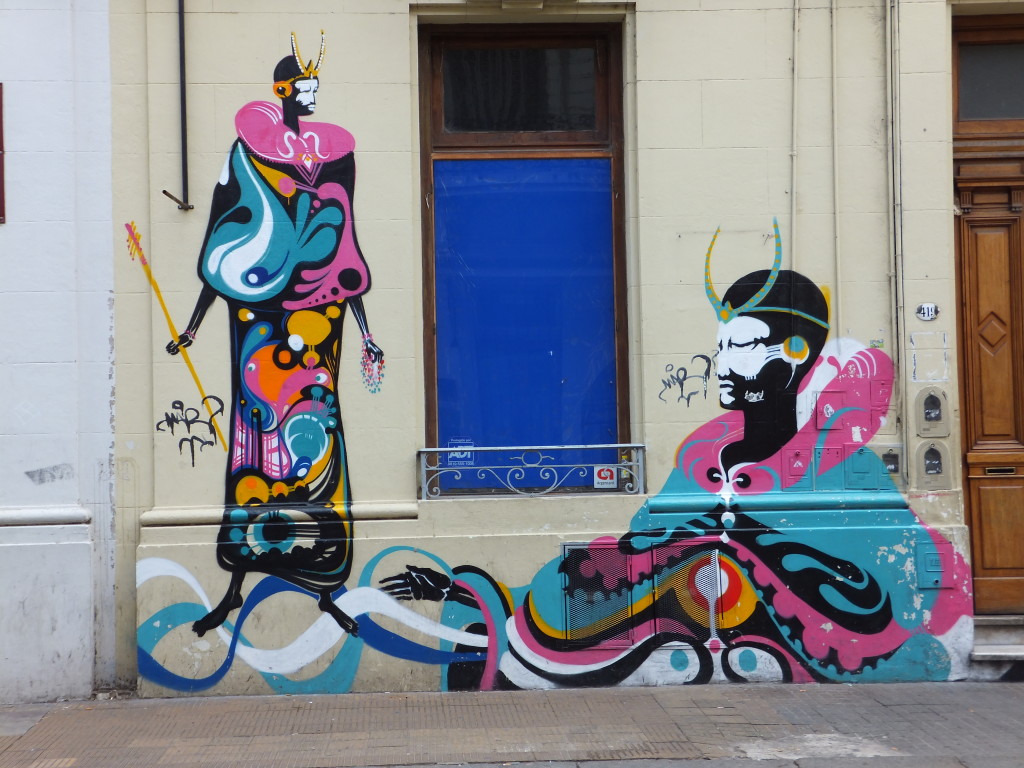 Others have been painted in bright colours to be converted into funky hangouts: 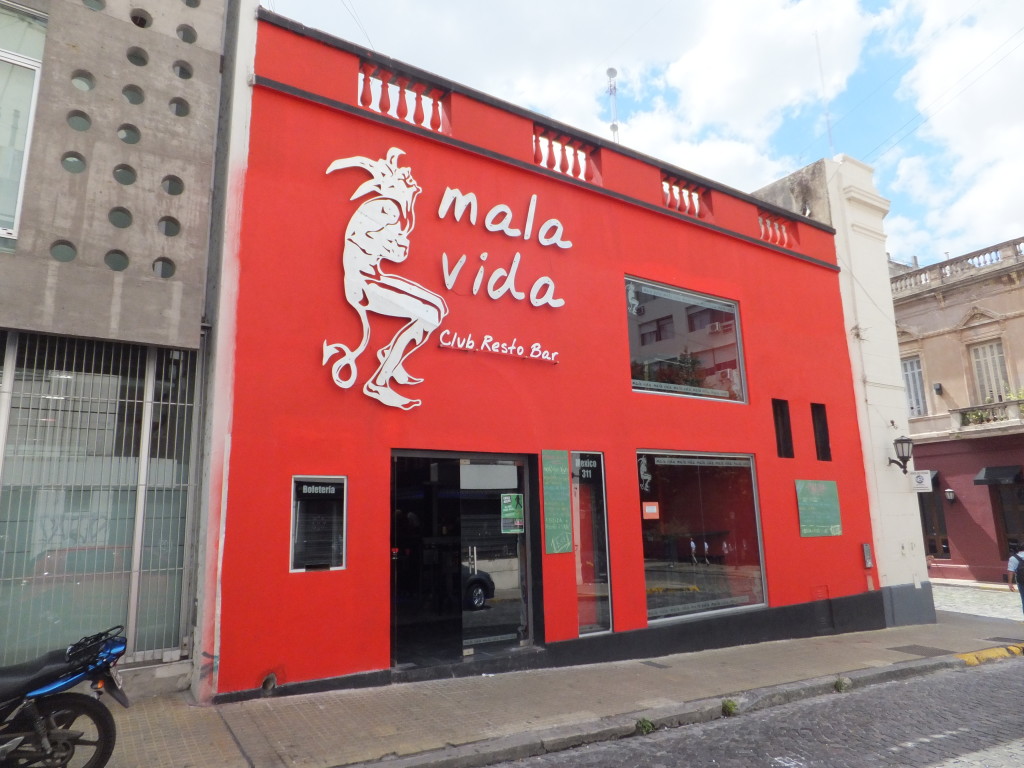 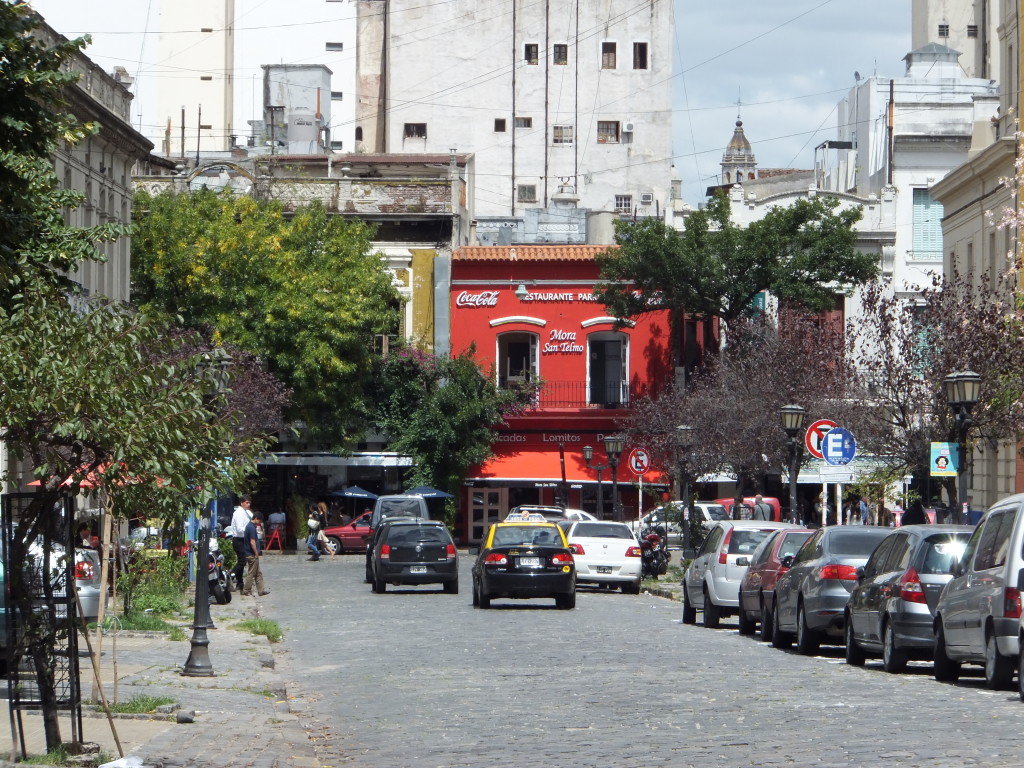 At the edge of San Telmo on the West side, large avenues open up onto green expanses sprinkled with pretty buildings: 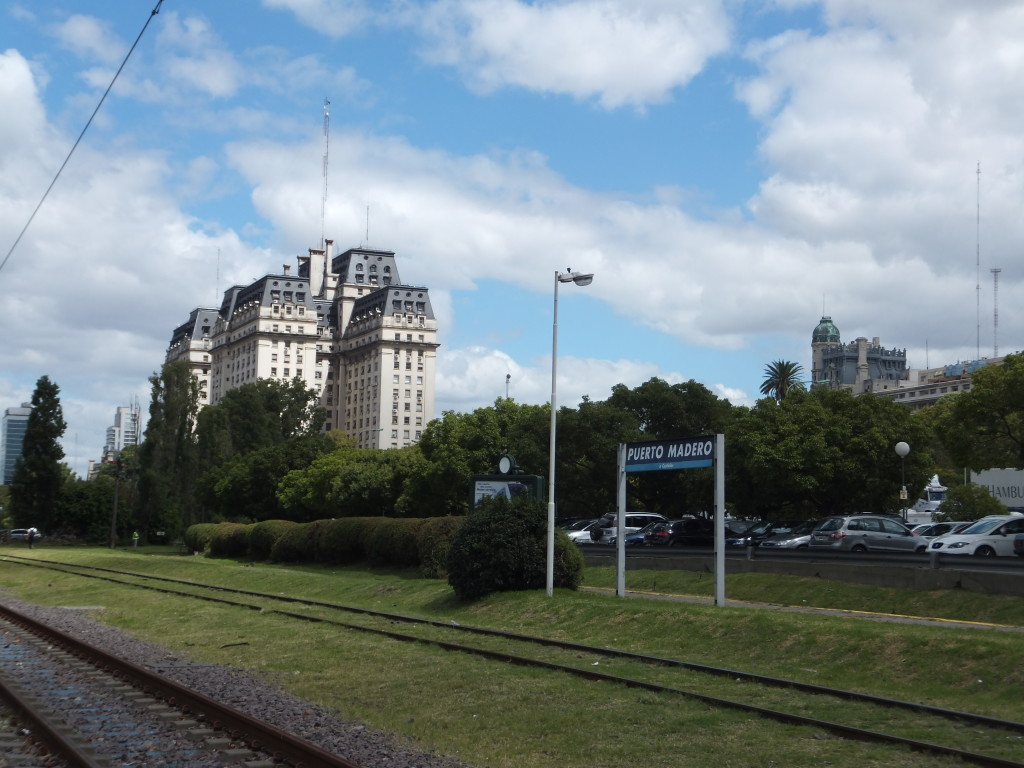 Heading further West, you soon reach Puerto Madero, the port area and most recently-created of BA’s barrios, a fact which is reflected in its resolutely more modern architecture!

The red-brick warehouses along the riverbanks have been converted into upmarket cafes and restaurant, and two sailing vessels, now open-air museums, are moored in the pier and can be visited for free. 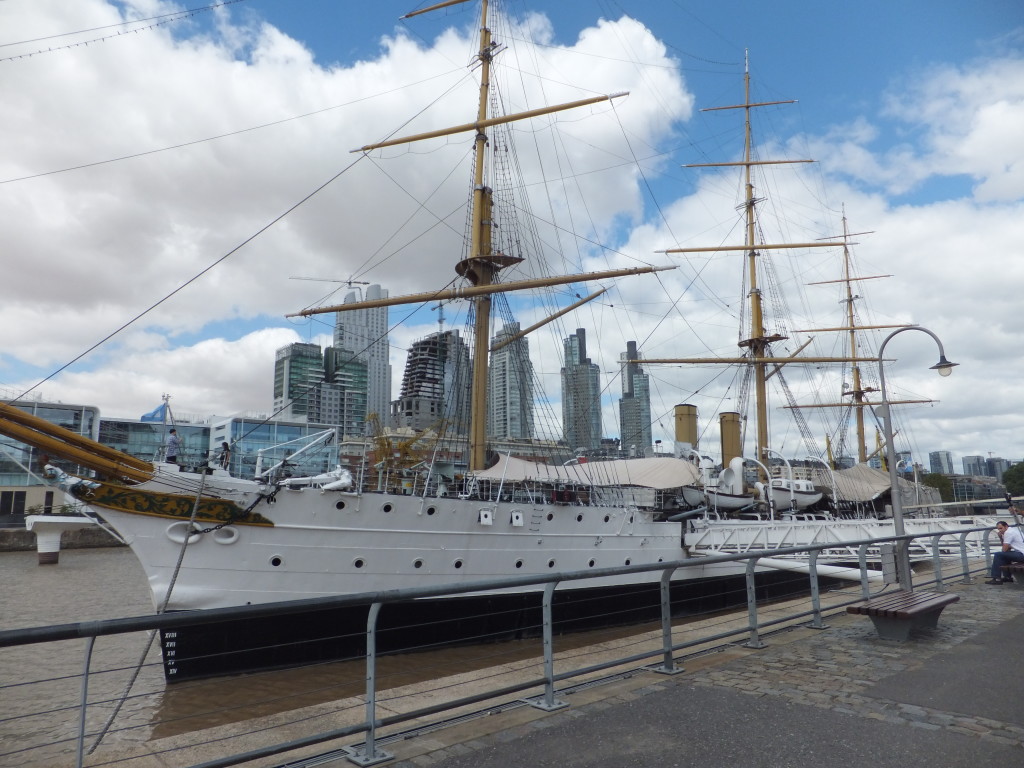 Retracing your steps, you get to the city’s epicentre, the aptly named Microcentro, organised around Avenida de Mayo and pedestrian Calle Florida. The streets were busy and full of touts so I didn’t want to get my camera out, but just imagine standard shopping streets with all the usual global brands plus a few local ones, and you’ll have a good idea.

Calle Florida is concluded by the very chic Galerias Pacifico with their French-styled glass dome and frescoed vault: 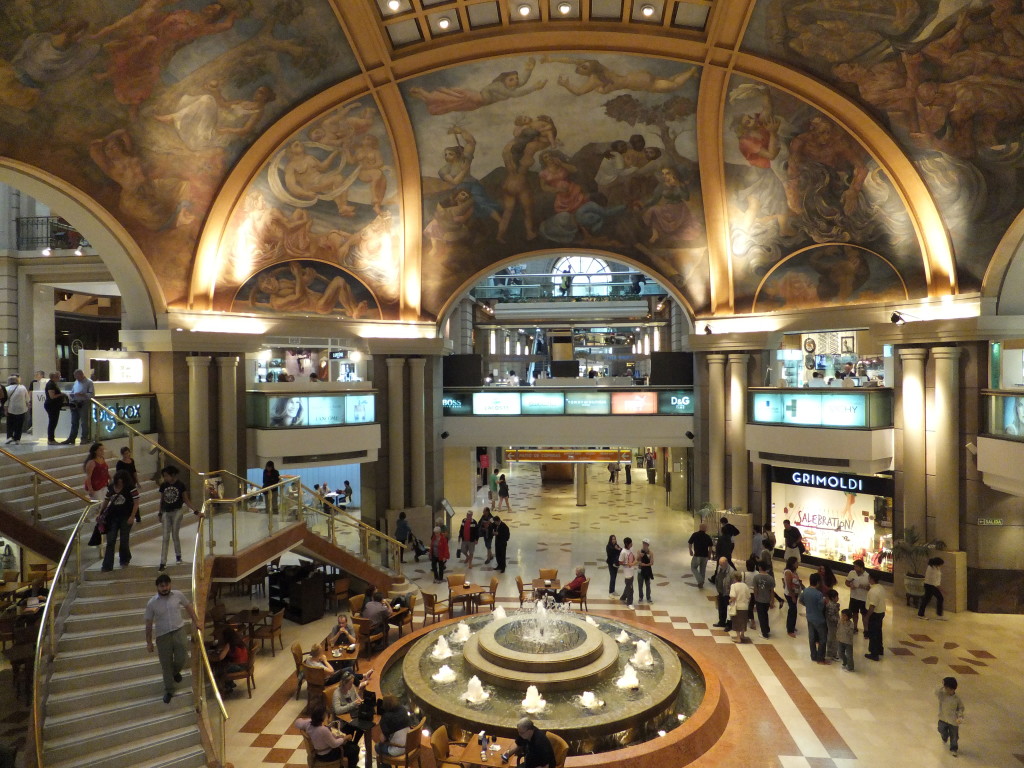 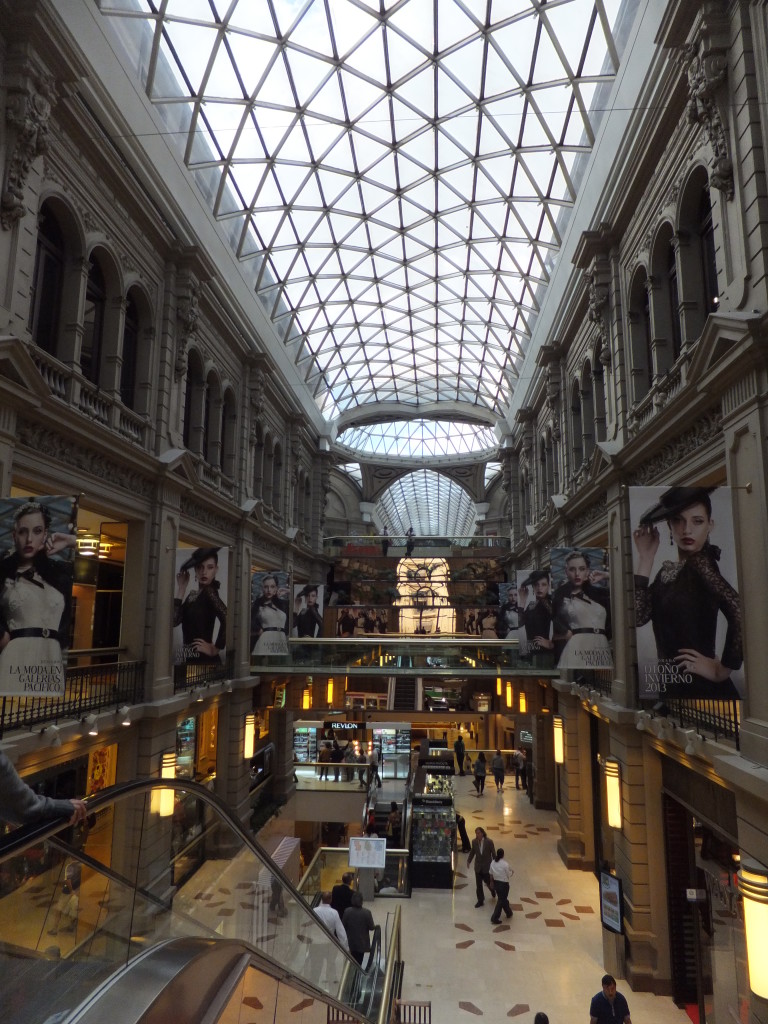 I ended my long walk around the city on Monday with a stop on Plaza San Nicolas, a large square surrounded by several monuments including the Teatro Colon (Buenos Aires’ opera house), before heading to my first Spanish class…but not without stopping on the way for a tea at Cafe Tortoni, the city’s oldest cafe and a favourite meeting place for intellectuals, writers and artists. Unfortunately, it is now haunted mainly by rich tourists, and the prices reflect that!

What of the food? The Argentinians don’t seem to have a strong concept of vegetarian or healthy food, with their staple diet consisting of beef, beef, sausage, chicken, lamb, and more beef. Eating places have menus declining various types of burgers and steaks, usually served with papas fritas (chips) and a leaf of lettuce for good measure. Being not a massive meat-lover, I am slightly impervious to the attractions of asado (grilled steak) and choripan (big chorizo sausage).

For budget travellers like me though, empanadas are a godsend: similar to Cornish pasties and filled with your choice of cheese, chicken and – yes, you’ve guessed it – beef mince, they’re good and for 15 pesos (£2) you can make a meal of 2 or 3 of them!

I am taking Spanish classes at the El Pasaje language school, one of the smaller ones in Buenos Aires, but also the cheapest and best-reviewed. I was very pleased with my first lesson and my teacher is called Agostina Salvaggio, which I’m sure you’ll agree is just a brilliant name!

Now if you’ll excuse me, I have some homework to do…

5 thoughts on “Buenos dias in Buenos Aires: my first days in the Argentinian capital”