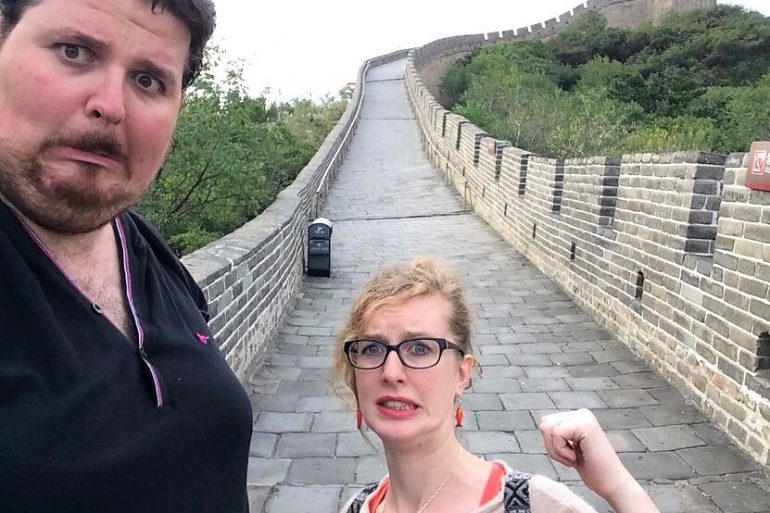 This involves only one step: turn left.

But let me rewind. When my friend managed to block out three weeks to come visit me in Korea, I suggested we include a few trips out of Seoul. ‘We could even go to Jeju’, I said. ‘Or Taiwan. Or the Philippines’.

‘Or…Beijing?!’, my friend replied, having done a quick online search. ‘There are really cheap flights!’.

China had never been on my list of priorities and I knew that there would be visa issues, but his enthusiasm was contagious, and soon enough I was super excited about going there too. We decided to hope for the best regarding visas and began to book our holiday in Beijing. As I scanned the usual hostel booking suspects for places to stay, I realised that the two top-rated guesthouses on the sites were not actually in Beijing but in Badaling, at the foot of the Great Wall. ‘How do you feel about spending a night at the Wall?’, I asked my friend. ‘Awesome, let’s do it!’, he replied.

So a few weeks later – having, against all odds, both obtained our visas seamlessly – we landed in China, armed with reservations for three nights in the centre of Beijing, and one night in Badaling at The Great Wall Courtyard Hostel.

And then…everyone we met started to tell us what a bad choice we’d made: Badaling was touristy and overcrowded. Too well-restored. We should have gone to Mutianyu or Simatai. ‘Ah, but we had to plan our holiday quickly’, we justified ourselves with embarrassment, ‘We didn’t have time to do much research and we found a good place to stay there, so, well, you know…’.

When the day came, we boarded a surprisingly modern and confortable train with an unsurprisingly elusive schedule from the Beijing West Rail Station, and arrived an hour later in at the foot of the Great Wall in Badaling.

When we got off the train, it was pitch black and much colder than in the city. Thankfully, the owner of the guesthouse had come to pick us up from the station and drove us to a small, empty hamlet. As we walked into the pretty, equally empty traditional Chinese courtyard house that was our home for the night, our host said ‘This weekend we were full, but today you’re the only guests. I would like to invite you to share dinner with my family in 10 minutes’.

Ten minutes later, we found ourselves sitting at a table with the owner, his two brothers, his sister, and his extremely old-looking mother, looking at a feast of about 10 different appetising dishes and a suspicious bottle of alcohol. Having introduced us to everyone, our host reached for the bottle: ‘This is baiju’, he said, filling our glasses. ‘Would you like to try?’.

And so began an hour of stuffing ourselves with the delicious food – fish, omelet, pancakes, and various types of meat and vegetable dishes – and washing it down at regular intervals with the horrendous rice liquor, at the sound of the older brother’s ‘Gan bei!’. (‘My brother doesn’t speak English’, the owner explained, ‘but he likes to drink!’.) When the ordeal was finally over and we’d finished our glasses, I – for some reason – suggested they pour us a second one. ‘Are you crazy?’, my friend whispered to me in French.

To our surprise, the brother declared himself out of the race, and we exchanged a victorious look. Camille and Gwenolé: 1. Chinese torture: 0.

As we headed to bed after the meal, the owner offered to drive us up to the Great Wall very early in the morning, and left us with this piece of advice: ‘When you get to the Wall tomorrow, you should take left’.

So when we got to the fork leading to the Great Wall at 7am the next morning, we remembered his tip and chose the left section. We walked a few steps, and turned around to realize that we were completely alone, while the opposite section was invaded. Our view was great, and our surroundings so peaceful. ‘Why does everyone go the other way?’, we both wondered.

We never ceased to wonder as we hiked a portion of the fortress, going up stairs and through watch towers, meeting a maximum of 15 people in the two hours we spent on the Wall.


We concluded our visit with a detour by the shops, where my friend bought copies of Mao’s red book for everyone he knew, and a look around the informative museum… before heading back to Beijing, where we spent the rest of our stay telling everyone we met, ‘You’re going to Mutianyu/Simatai. Why? You could get to Badaling in half the time and have the Wall to yourselves!’. Sometimes it feels good to be right.

Where to stay by the Great Wall

I would definitely recommend spending the night in Badaling for a chance to have the Wall to yourself in the early morning! We really liked The Great Wall Courtyard, which was more of a guesthouse than a hostel despite its name. If you’re lucky, you’ll even be invited to partake in the host family’s dinner and a drinking competition. Yay! Book your hotel night at the The Great Wall Courtyard Hostel to be first on the Wall!


Looking for a plusher option? If the Courtyard Hostel is full or if you fancy a little extra comfort, don’t worry, there are other options available! Have a look here:

Have you been to the Great Wall or are you planning to go? Badaling, Mutianyu or Simatai? Let me know in the comments below!

If you would like to follow the rest of my adventures, consider subscribing to the blog to receive all updates by email, and connecting with Camille in Wonderlands on Facebook, where I regularly post snapshots and musings that haven’t made it onto the site.
Tags : Badaling, baiju, Beijing, China, Great Wall, Mutianyu, Planning, SImatai