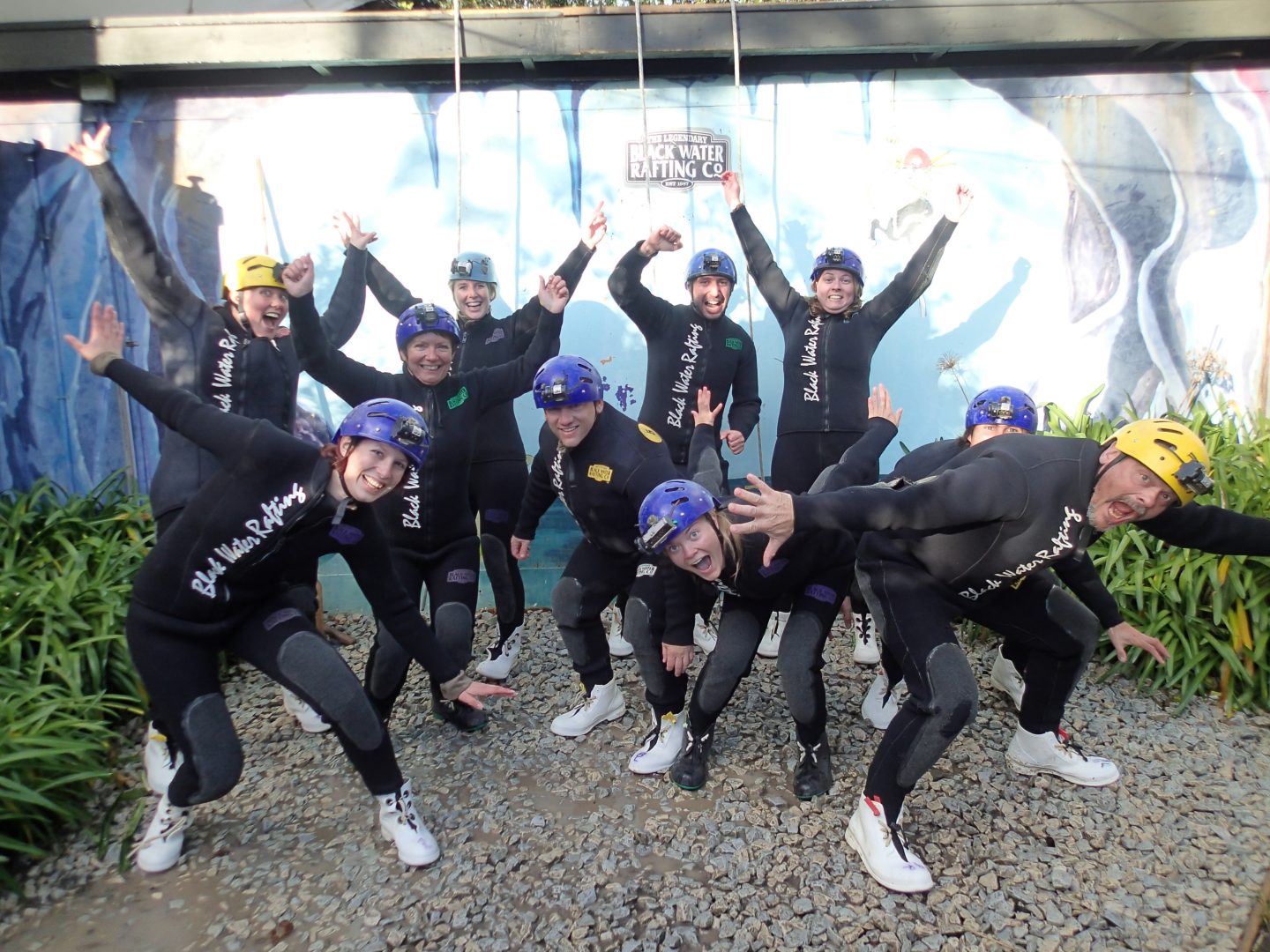 Trust me: there aren’t many more unpleasant experiences in life than putting on a wetsuit that’s already wet. And that’s how my eagerly-awaited black-water rafting adventure begun…

Wait, black-water rafting? What is that anyway?!

Good question! For months, I had been telling everyone that I was going to black-water raft in New Zealand, without bothering to check what it really meant… All I vaguely knew was that, some way or other, I would float down an underground stream in one of the 300-odd limestone caves that make up the spectacular Waitomo Caves. 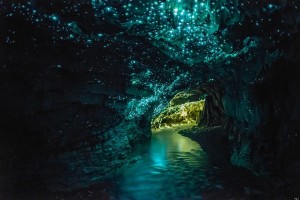 Having never rafted on water of any colour before, I had decided to practise in South America with two rafting trips – the first in Salta, Argentina, and the second on my way to the Ecuadorian rainforest (in a river which, as I found out just before our boat flipped, was infested with caimans…).

As it turns out, my assiduous preparation was all for nothing: ‘black-water rafting’ is completely misnamed – the water is not black, and it’s not rafting. There aren’t really any proper rapids underground, and instead of riding in a boat you’re actually sitting on a big rubber floater, doing what is more appropriately known as ‘tubing’.

This activity, along with the millions of glowworms that inhabit the caves, is what makes the Waitomo site special. As my guide pointed out, we have many incredible caves in Europe – and I can think of several world-class ones in France alone – and I shouldn’t expect to be blown away by the geography or the rock formations themselves. What makes Waitomo different is the original way you can travel through the caves, and the shiny little creatures that light your path.

In fact, New Zealand being New Zealand, there is more than one unusual way to visit the Waitomo Caves. It’s not like Kiwiland to be content with a tame walk or quiet boat ride, so adventure companies have devised a number of exciting activities to be attempted in the dark – including abseiling, rock climbing, ziplining and canyoning.

Each company offers different combinations of the above activities in tours of varying lengths and prices, and it can be difficult to choose the right one(s) for you. Of course, me being me, I wanted to do it ALL (in one afternoon!) and I therefore opted initially for Kiwi Cave Rafting’s 5-hour wet tour, which promised abseiling, glow worms, black-water rafting, caving and rock climbing all in one.

Sadly, a minimum of two people were needed for the tour to go ahead, and I turned out to be the only person interested in spending 5 hours in freezing underground water on that particular wet winter day… Regretfully therefore, I had to fall back on my second option: the Legendary Black Water Rafting Company’s Black Labyrinth tour, a 3-hour caving and tubing trip inside the Ruakuri Cave.

And so back you find me in the changing rooms, putting on my wet wetsuit and socks, doing my fair share of moaning and wincing in the process.

Once I – and everyone else – had survived that ordeal, our group of 10 was gathered and made to take silly poses for the souvenir photos – which I suspected was mainly an excuse to keep us warm (or at the very least to take our minds off the progressive icing of our bones). 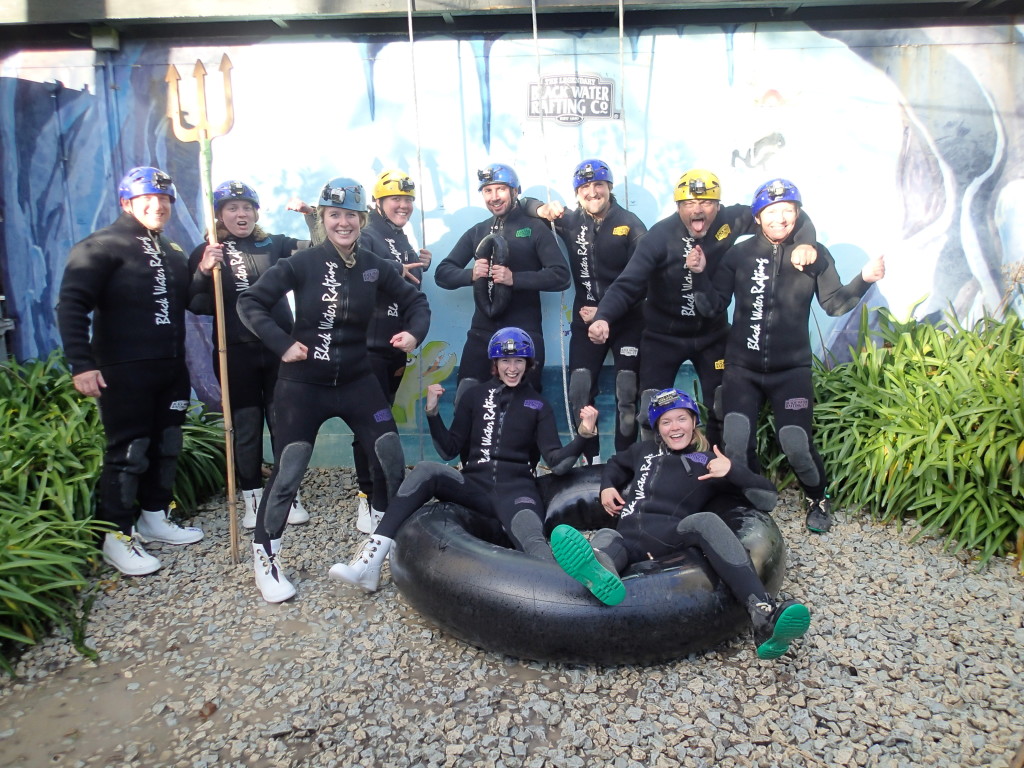 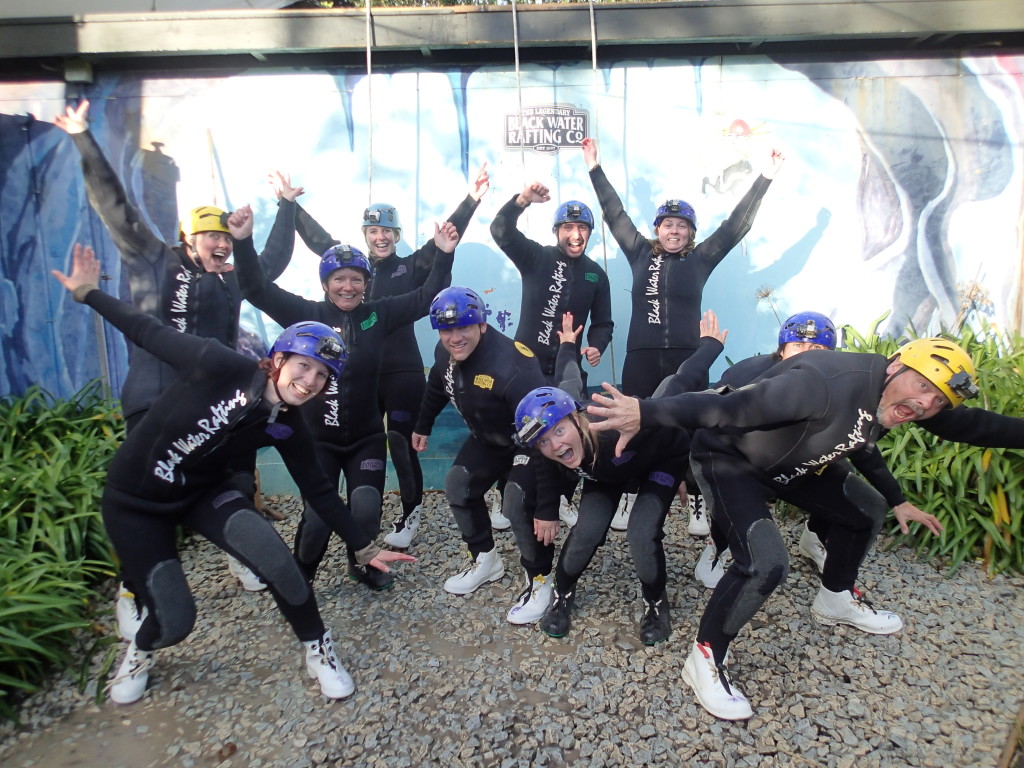 We then boarded a minibus for a 15-minute ride to the cave, where we selected our tube and received an initiation in the incongruous art of jumping backwards into a river and landing ass-first in a giant rubber floater.

This was my reaction: 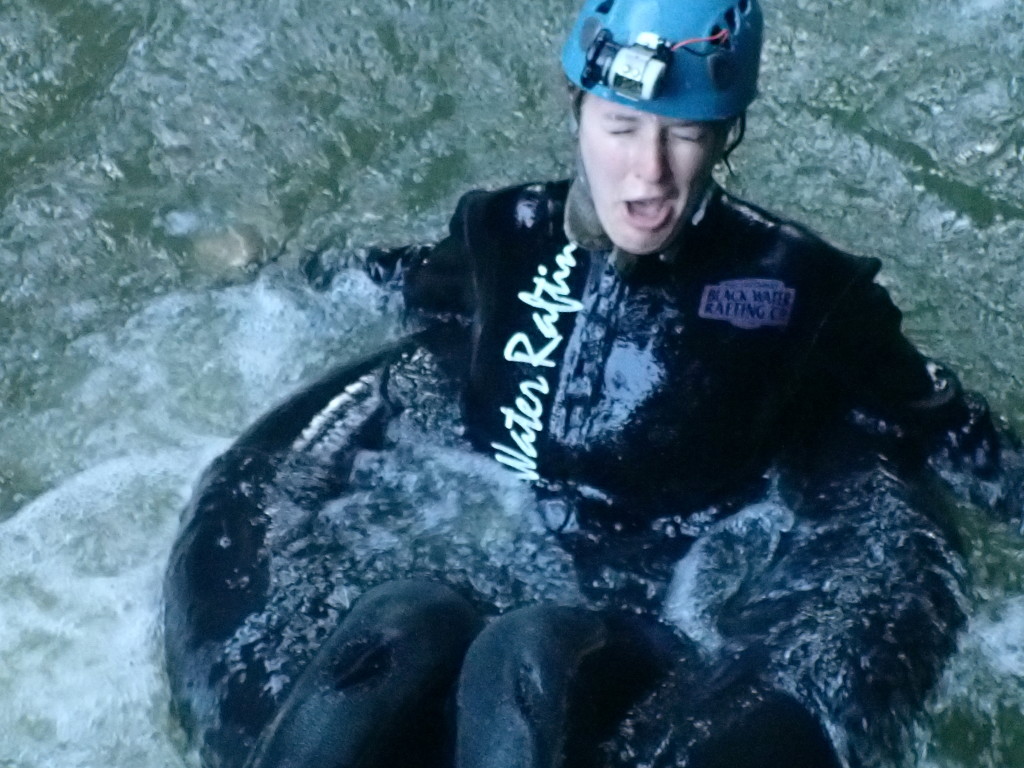 Once we’d all stopped whimpering about how cold the water was, a short uphill hike took us to the cave’s entrance. 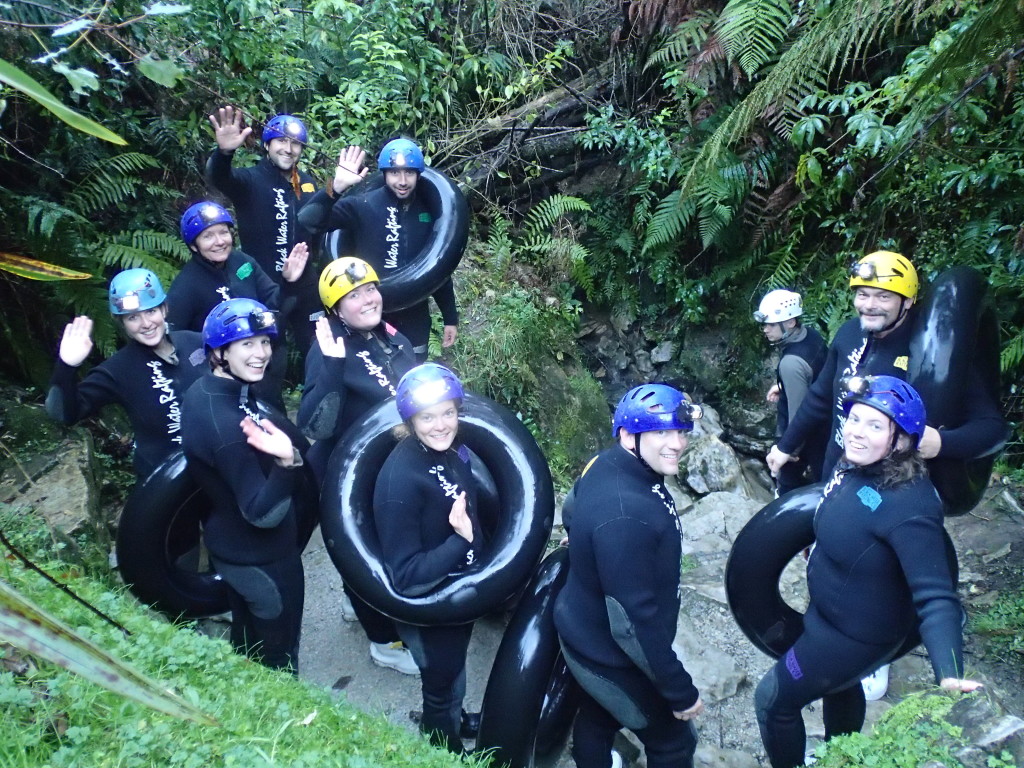 And then, we took the plunge.

When the instructor asked who was brave enough to take the lead, I had to volunteer – and so, for the next 30 minutes I guided our expedition through narrow tunnels and larger openings, paddling in the stream and cutting our way through stalagtites (and -mites)… with the occasional picture break. 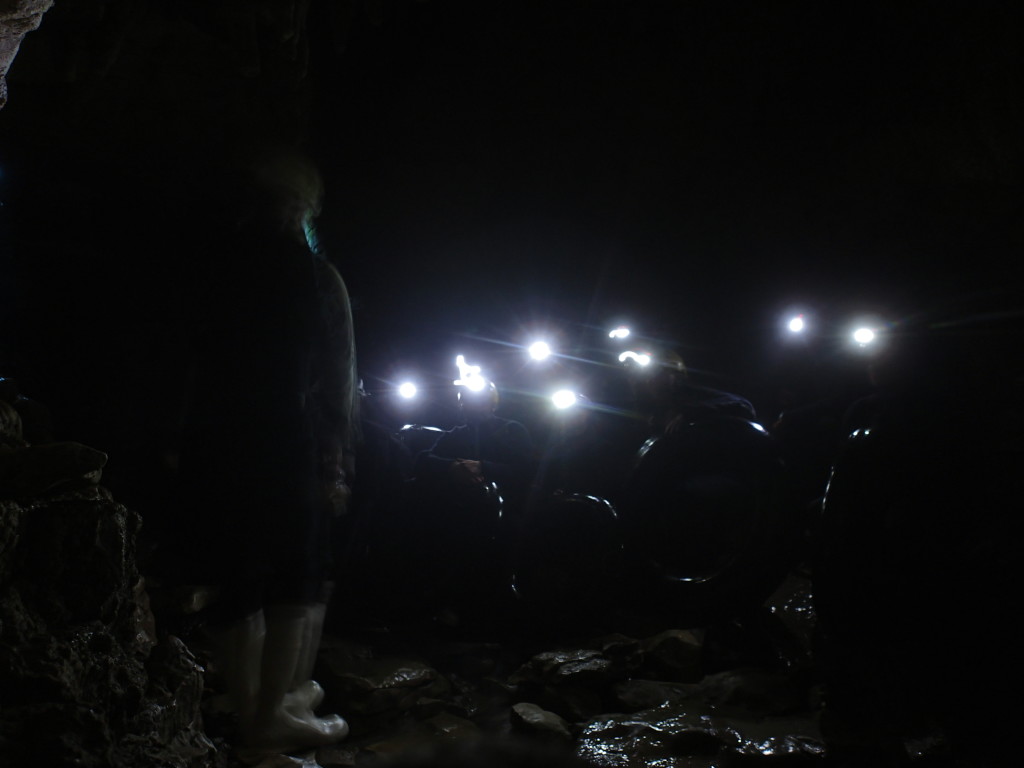 I safely led the party to our first tubing opportunity, and one of the trip’s highlights: a jump down a roaring waterfall. 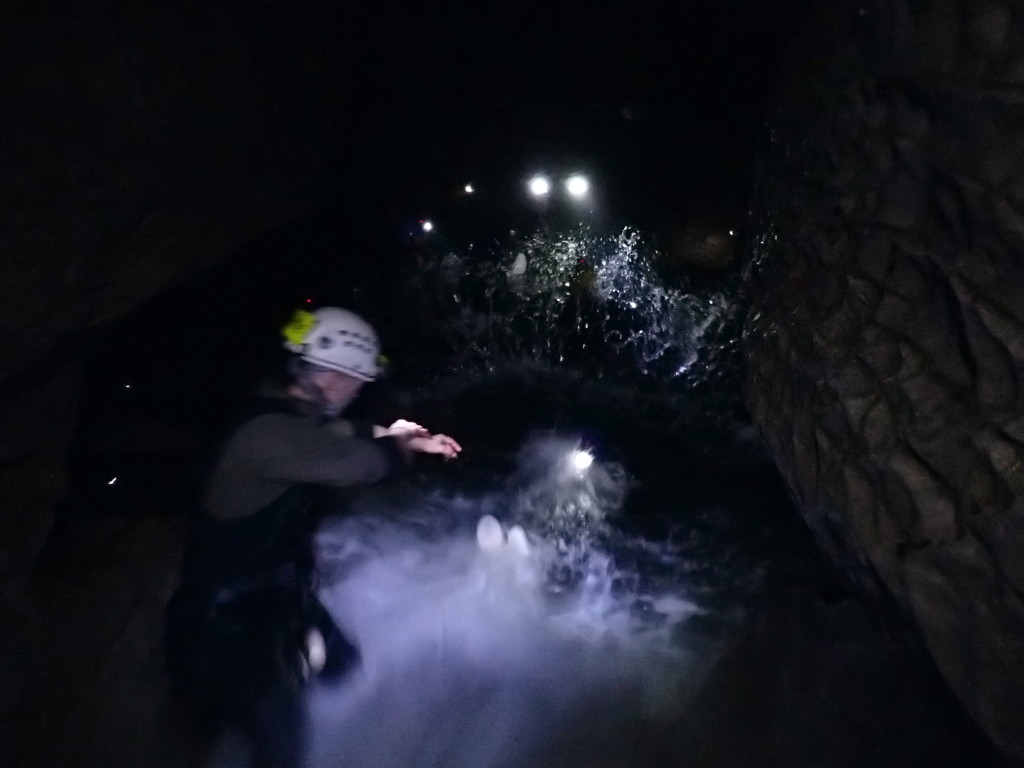 As we floated down the stream on our way to the next waterfall, we spotted our first glowworms. Unfortunately, without my glasses on this wasn’t exactly a high-definition experience: the lights tended to merge into blurry stains in my faulty retinas. And the tour’s no-camera policy also means that I have zero photos to share with you…

Nonetheless, our guides provided some entertaining facts about the little creatures – did you know that glowworms make the most of the last days of their existence by copulating non-stop for 26 hours, at the end of which the male dies?

Continuing on, we entered the best part of the tour: a jump down another – and even higher – waterfall, followed by a slow glide down the river in perfect silence and darkness, giving us the chance to admire the glowworms (or, in my case, the blurry stains) decorating the ceiling…

The enchantment was only broken by a ray of daylight, as we approached the cave’s exit.

Back in the company’s offices, the tour was rounded up with a hot shower and a complimentary bagel and soup – a nice touch, and definitely what I needed to warm up my purple fingers and face…

Overall, the Black Labyrinth was perhaps not as action-packed as I would have liked and I was disappointed not to be able to do the more challenging Kiwi Cave tour… but it was good value and delivered exactly what it promised. And let’s be honest: could I really have endured another 2 hours in the water?!

A year ago we were welcoming spring in New York Ci

When we arrived in Chiang Mai last month and I tol

How did your year start? . My friend @tokyobecky a