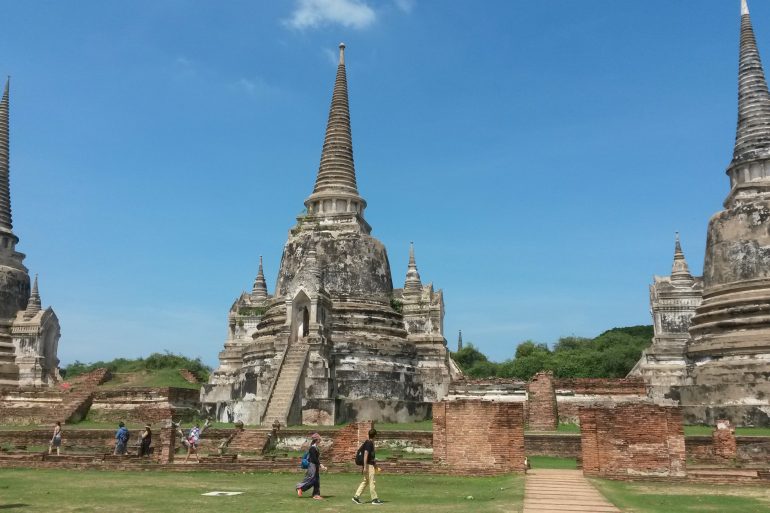 When you spend any length of time in Asia, visiting temples can become, well, a little repetitive.

In the space of two months, I had been in Korea, China, Japan, and Thailand, four countries where religious (mainly Buddhist) buildings – temples, monasteries, shrines – constitute some of the main attractions. Okay, most of those places are stunning, but still, one does get somewhat desensitized, particularly when one is not religious oneself. I mean, how many friggin’ Buddhas can you bow to before you’re totally sick of the guy?

In light of this, Ayutthaya only sounded half-appealing. Yes it was a must-see, yes my sister had loved it, but a town famous for its countless temples? Not even temples: ruins of temples. Hmmmph.

On the other hand, I had been in Bangkok for three days and had reached my Official Bangkok Tolerance Limit. Yes, that is a thing. Not that I dislike the city – it has a lot to offer -, but well… it tends to test my patience. What really bugs me about Bangkok is the transport: the subway and Skytrain don’t cover the entire city and don’t reach some of the main touristic spots, meaning that you have to take taxis (or tuk-tuks), meaning that I have to spend my time sparring with drivers who never seem to know where I’m going, even if it happens to be the most famous corner of Bangkok (Wat Pho? The Imperial Palace? Uh, no, never heard…), and relentlessly try to rip me off.

At that point, I was craving some peace and quiet, and a place where I could have my own means of transportation in order to visit at my own pace, on my own terms. Ayutthaya, only about 64 kilometers north of Bangkok, sounded like it would provide just that, with the added benefit of being on the way to my final destination, Chiang Mai.

Ayutthaya was founded by King Ramathibodi I in 1350 as the capital of the Siam Kingdom, until it was destroyed and sacked by the Burmese army in 1767. The ruins of the old city are preserved in the Ayutthaya historical park, a Unesco World Heritage Site. The countless remains of temples are scattered either side of the Chao Phraya River and along the canals that once earned Ayutthaya the nickname of ‘Venice of the East’.

While many agencies offer day tours of the city from Bangkok, Ayutthaya can easily be visited independently and warrants an overnight stay if you don’t like to be rushed (or, in my case, if you’re a lazy ass who doesn’t like to wake up at 5 am to join a group tour!). Just board one of the many buses, minivans or trains that will take you there in less than two hours; alight; then jump on a bike and… PEDAL!

At least that’s what I did! After turning down two taxi drivers who asked for 200 baht to take me to Hualamphong from my Sukhumvit hostel, the third agreed to put the meter on and drove me to the station for… 80 baht (see what I mean?!). A cheap local train ride and a song thae trip later, I checked into the cute bedroom at my guesthouse, the newly-opened Tamarind Guesthouse, where I was provided with a map of the city and a bicycle.

Time for some temples!

No matter how jaded I can get, sometimes stupid things make me happy. Things like riding a bike and getting lost in a pretty place. Things like being alone in the middle of a grand historical site and feeling like a proper explorer. Five minutes into my first cycle around town, I knew coming to Ayutthaya was a great idea, and when I stepped into the precincts of my first temple and found myself trodding the overgrown grass among deserted ruins as the sun began to set, I was completely charmed. And excited.

Fun fact about me: when I was young, I dreamed of being an archaeologist. My sister, best friend and I founded a very serious club consisting of three members (us). We convened in our respective bedrooms to watch archaeological videos, discuss the mysteries of past civilisations, and put pocket money aside for our future trip to Egypt. Then, we grew up and realized that archaeology wasn’t all Indiana Jones and actually involved studying pretty hardcore science, so we gave up..!

Well, walking around Wat Ratchaburana reawakened that spirit of discovery and I immediately felt like a kid again!

(I climbed to the top of the chedi to take this picture, and discovered there was a sort of grotto-basement, once filled with treasures, now empty, hidden in the entrails of the tower…) 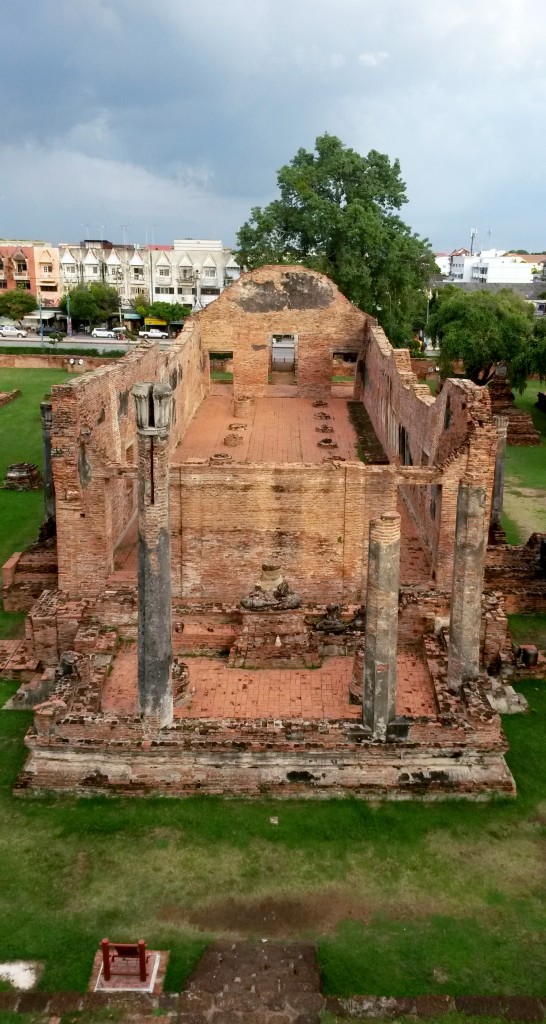 With night falling, I then set out on a different quest: food! Ayutthaya is somewhat limited in choices and the main budget option was the local night market, where I had to dodge the snake and other less-conventional delicacies to get to my Thai faves…

Eventually filled, I retreated to my room to prepare my 2nd day itinerary around the town’s highlights.

Reunited with my bike on day two, I headed to Wat Mahathat, the temple known for its Buddha head emerging from tree roots – i.e., this: 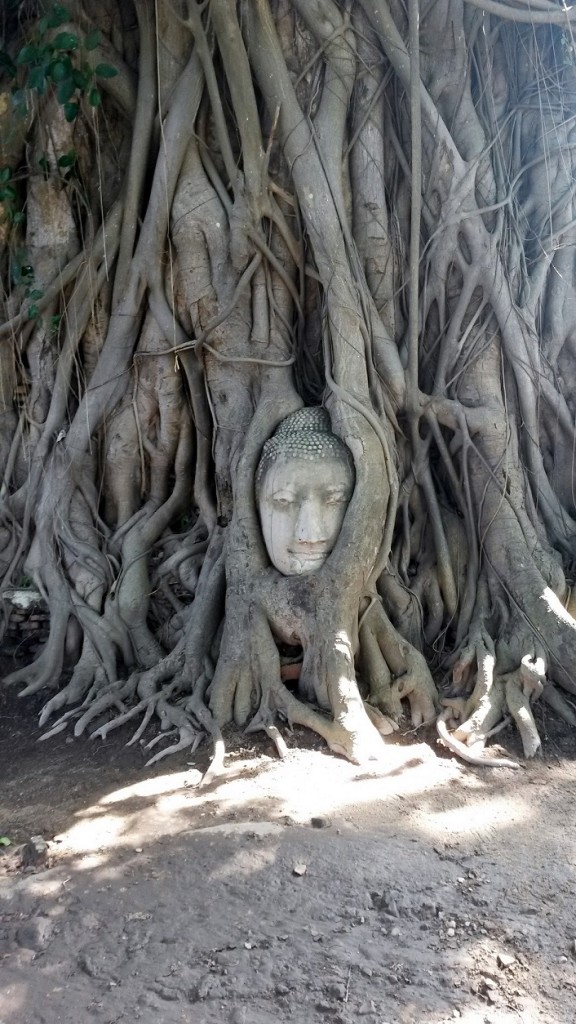 This was by no means the only beheaded or dismembered Buddha in the neighbourhood, as broken statues abounded… 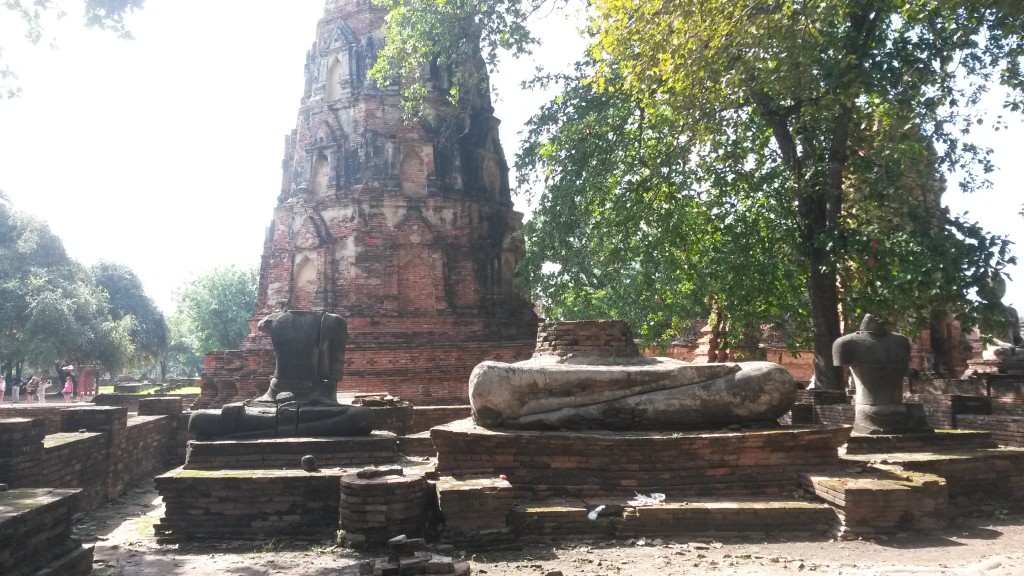 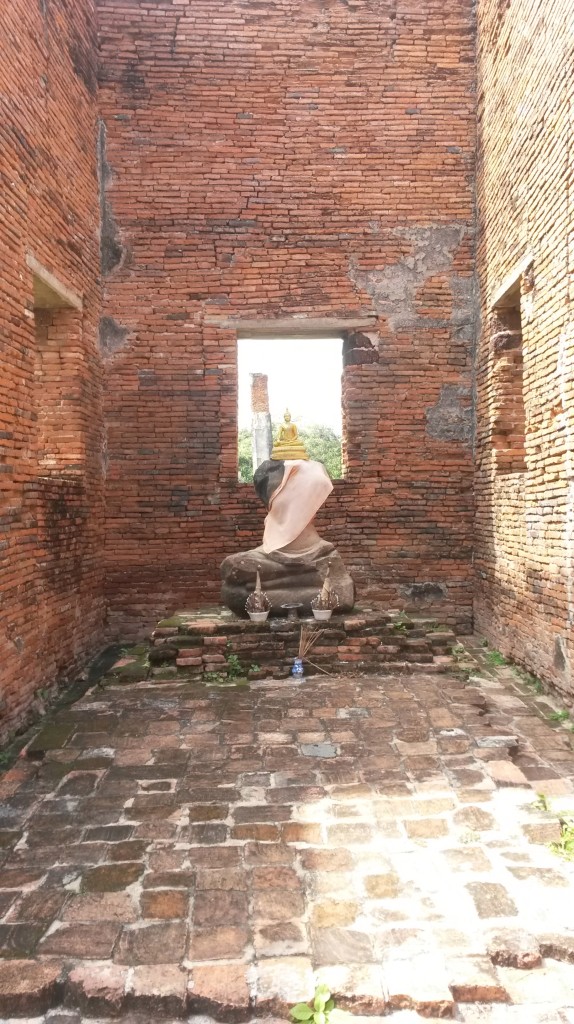 Wat Mahathat was another majestic site which couldn’t help make me wonder just how incredible Ayutthaya must have looked in its full glory. 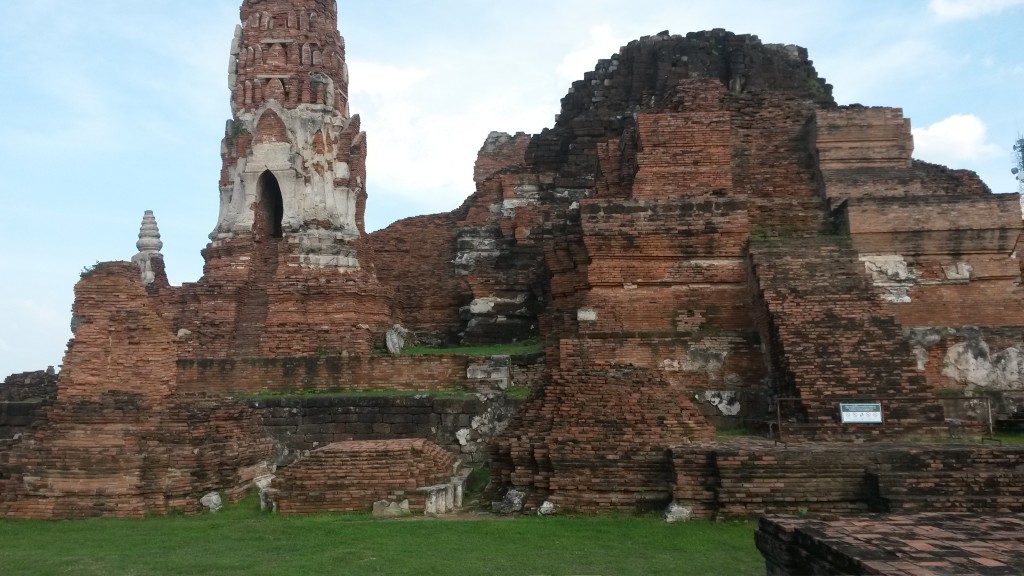 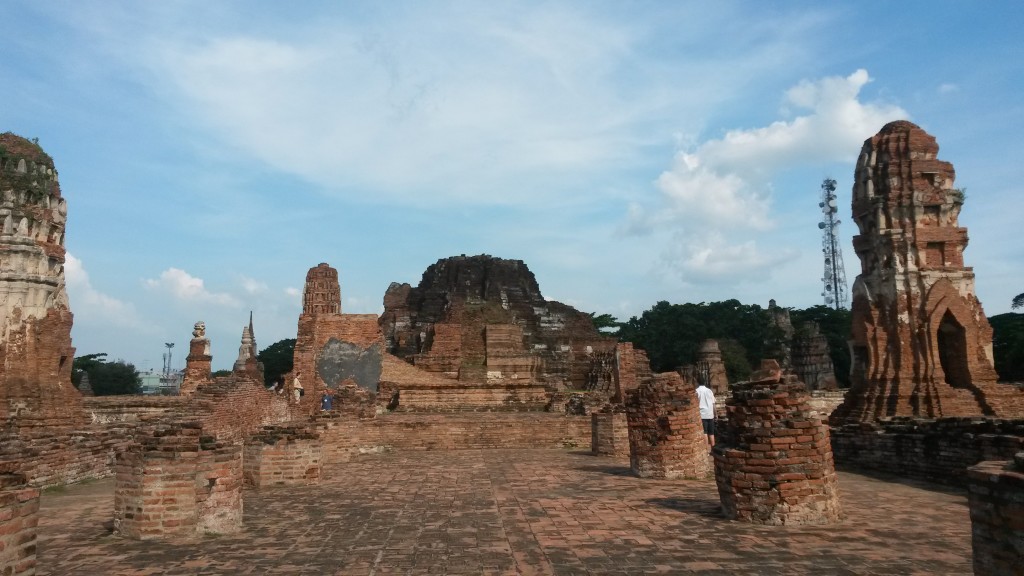 After completing my tour of Wat Mahathat, I cycled towards one of Ayutthaya’s stars, Wat Sri Sanphet, with its three pointy chedis… 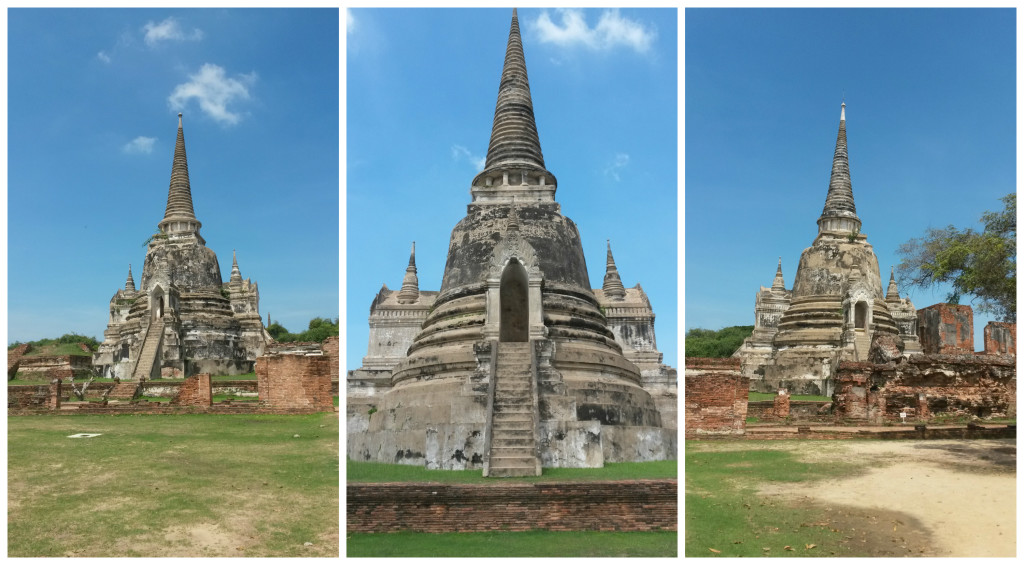 Georgeous, but almost impossible to fit together in one photo!

As I circled the towers, I was attracted by some distant chanting and bright colors, and came across a group of praying monks, who immediately invited me to join them. Not that I knew the songs – so, I sat down and sort of hummed along! 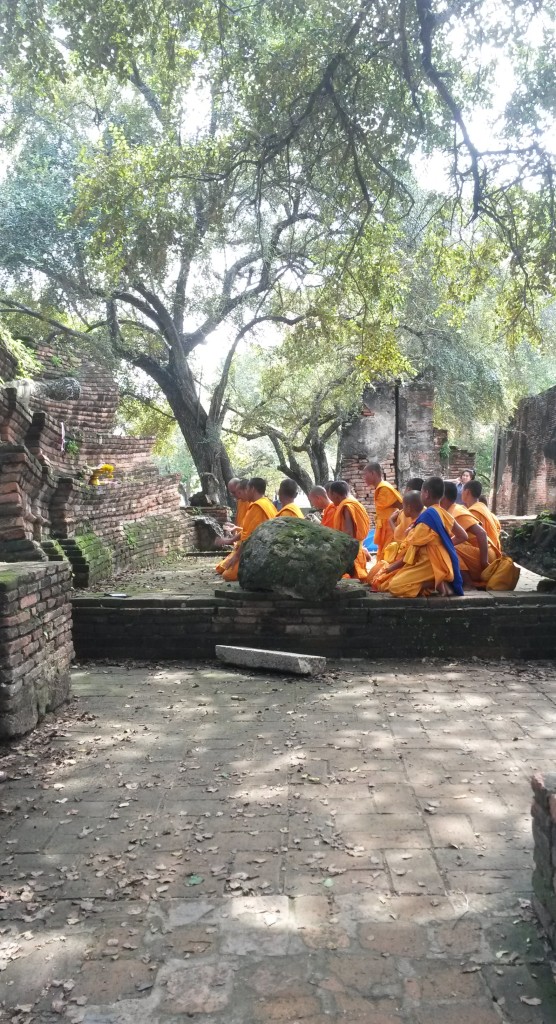 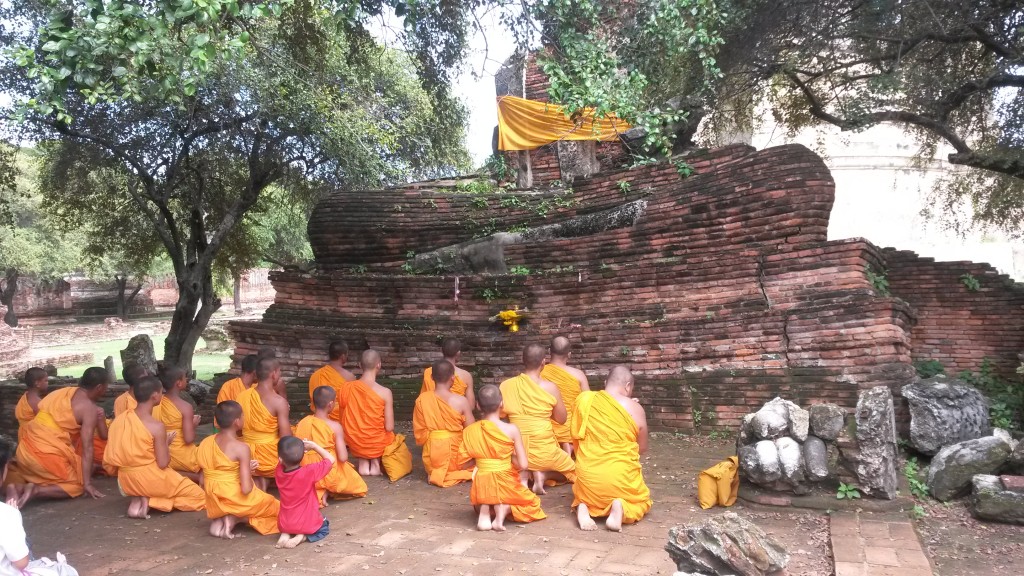 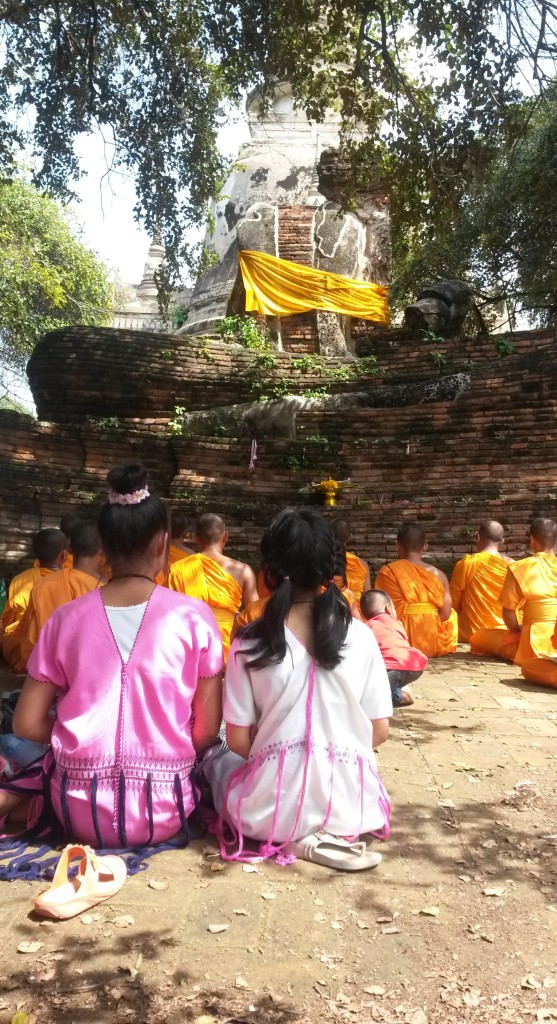 My duty done, I hopped to Wat Lokayasutharam to catch a glimpse of the reclining Buddha…

By then, it was time to get back to my hostel… because, for some reason, I had booked myself on an evening cruise to see even more temples! I am normally wary of this type of attraction, but at 200 baht (5 euros) for two hours’ boating, it wasn’t too wild a risk!

Circling the island of Ayutthaya on water turned out to be a nice way to experience the city differently and witness some of the river life. 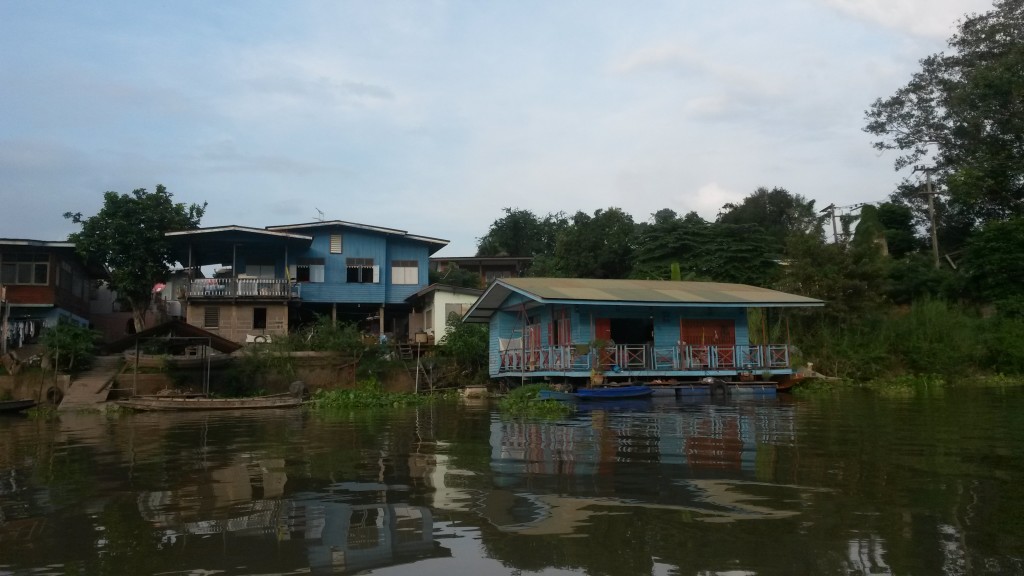 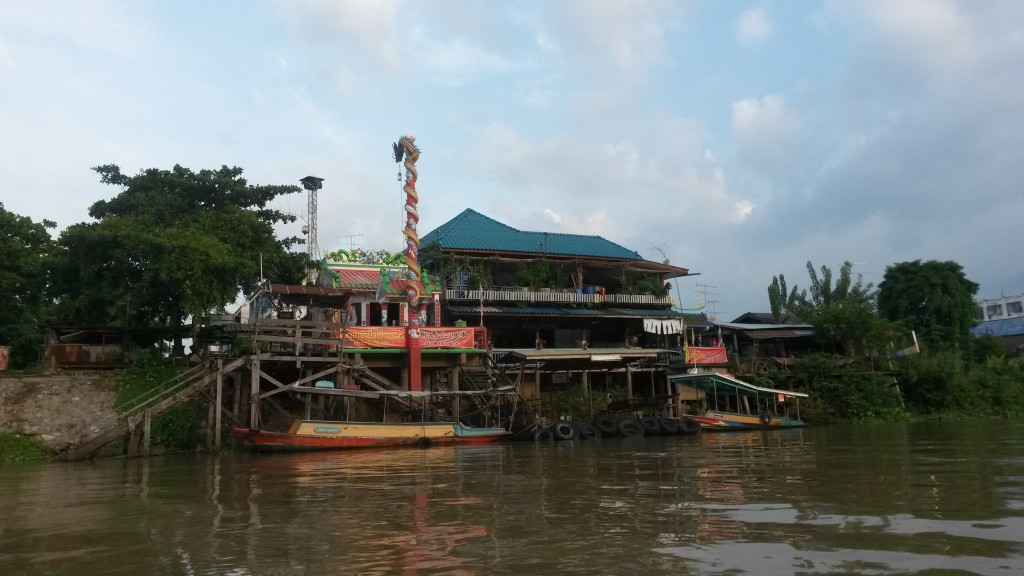 However, I was slightly annoyed to realize that our first three stops took us to closed temples. Because we had started the cruise 30 minutes late, we were missing out on all the promised sights, and I was starting to regret my decision… Until we got to Wat Chaiwatthanaram, a temple so impressive that it redeemed the entire thing and made the tour worth it!

It was more than a little dusky by then, and, being aware of my camera’s limitations and lack of cooperation at nighttime, I ran as soon as we docked to take some snaps before it got pitch black. 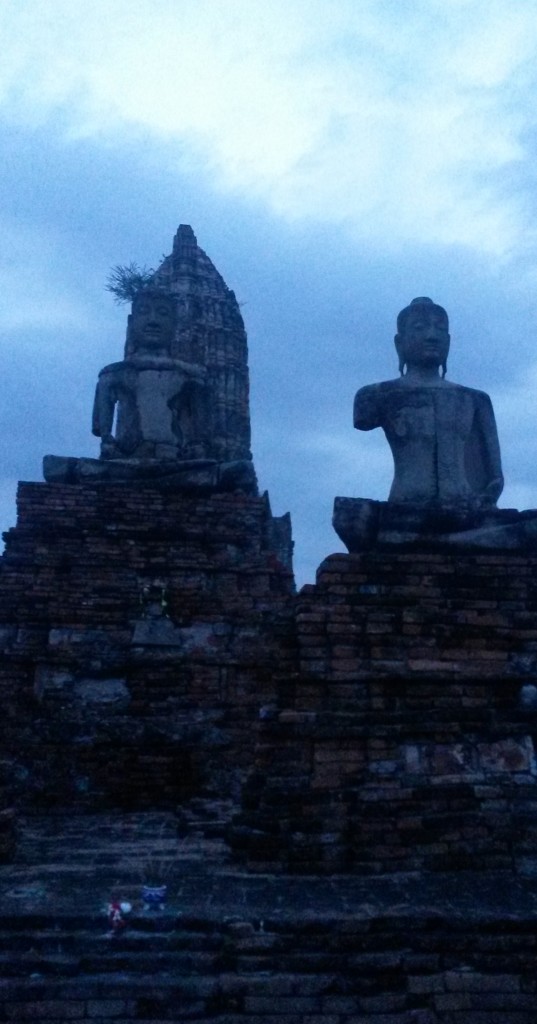 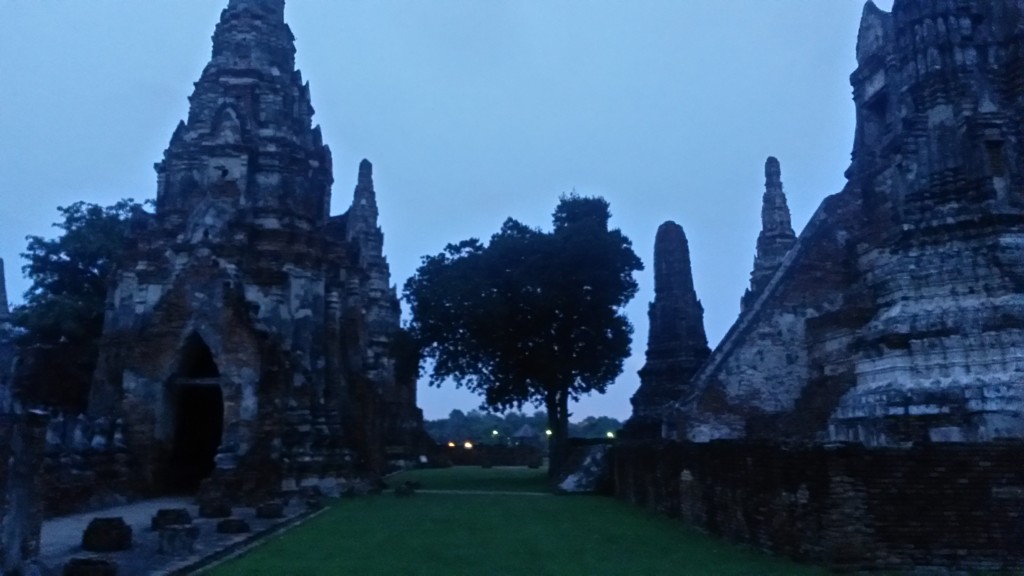 After wandering around and soaking in the eerie atmosphere (only enhanced by the flying bats) for 20 minutes, it suddenly dawned on me that I hadn’t met a soul in a while… and I realized that everyone was back in the boat, waiting for me. However, as I turned around for one last look at Wat Chaiwattanaram, surprise! In the few seconds I had turned my back to the temple, it had been lit up!

All in all, Ayutthaya was the perfect antidote to Bangkok exhaustion and temple blasédness. If you’re stuck in the capital and craving greenery, history, or adventure and the freedom to roam around sans taxi hassle, the ancient capital of the Siam Kingdom makes a great option for a weekend away or a stop on your northbound journey.

Have you been to Ayutthaya or are you planning to go? Are you more of a temple lover or temple dodger when travelling in Asia? Do you love Bangkok or does it drive you a bit crazy? Let me know in the comments below!