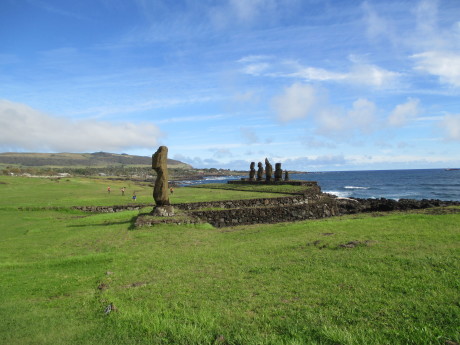 Yes: of all the places I could fall in love with, it had to be this tiny island in the middle of the Pacific ocean, 3,512 km – and a 4-hour flight – from the nearest continental point.

For those of you who only vaguely know it by name, Easter Island, a.k.a. ‘Rapa Nui’ in the island’s native Maori language, is located halfway between Chile and French-speaking Tahiti. One of the most remote inhabited islands in the world, it is a special territory of Chile, although its culture is inspired by a rich mix of Polynesian and Maori traditions. According to the island’s last census, it has a population of 3791, with the quasi-totality of the residents living in the only ‘town’, Hanga Roa.

With a superficy of 166 km2, the island has two official languages, Spanish and Rapa Nui, and its inhabitants are also called – you’ve guessed it – Rapa Nui! Of course, it is mostly famous for being the home of the intriguing, giant carved statues known as moai that are sprinkled all around the island.

When I was young, my father had a big coffee table book full of pictures of the moai – and relating the various theories about their mysterious origins – which absolutely fascinated me. So, when I had the opportunity to include the island as a stop on my RTW ticket, I didn’t have to think about it twice!

As I began to plan my visit however, I was a little phased by some of the blog posts and comments I kept coming across describing the island as ‘boring’, ‘disappointing’ and ‘not worth spending more than one or two days on’. Could it really be?

Well, what I found when I arrived on the island was a quiet little paradise, blessed with stunning scenery, plenty of archeological and cultural wonders, a near-perfect climate nurturing lush vegetation, and some of the friendliest people I’d ever met. Somewhere that managed to be at once more traditional AND much more modern than I’d expected… 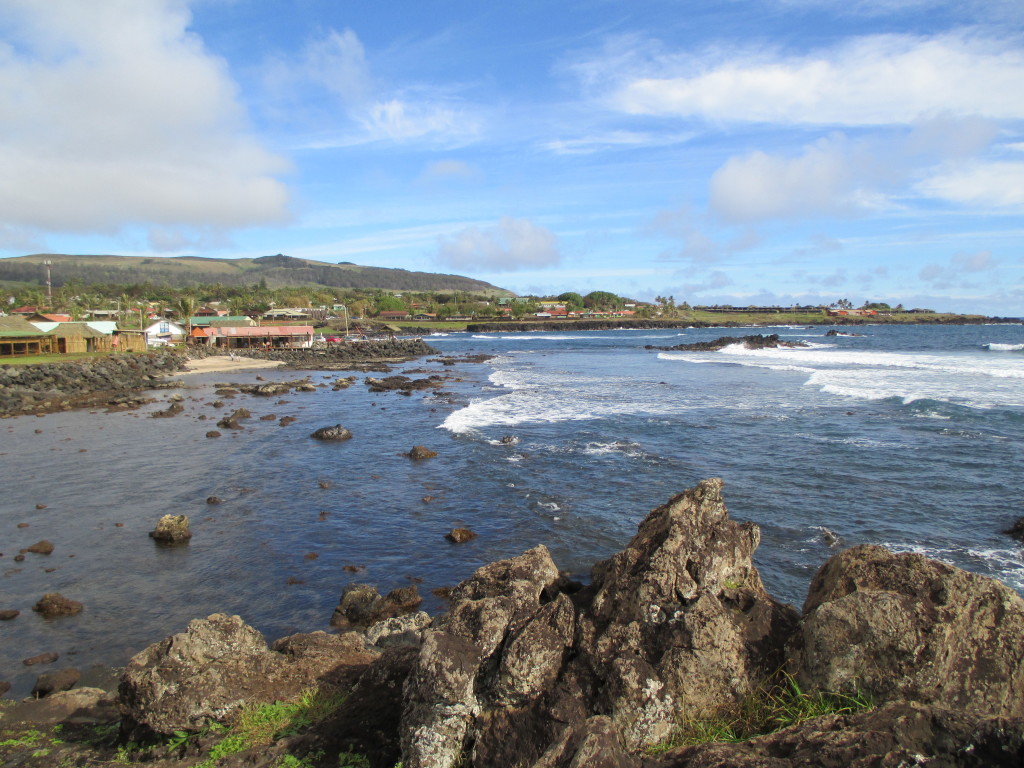 With only two days and a half on the island, there was no time to waste – so, after changing into some lighter clothing to adjust to the summery weather, I decided to forget all about my serious sleep deprivation, and immediately set off on my first exploratory walk of the island… which took me to picturesque Hanga Roa bay and the nearby moai sites:

It was there I first sighted these strange creatures: 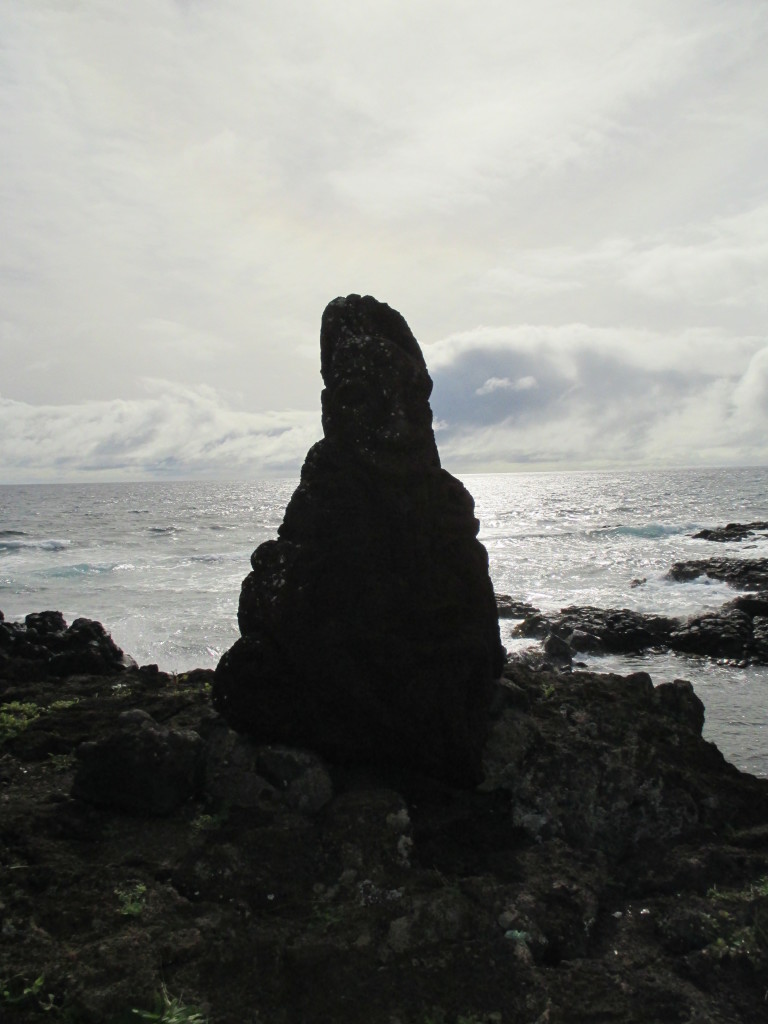 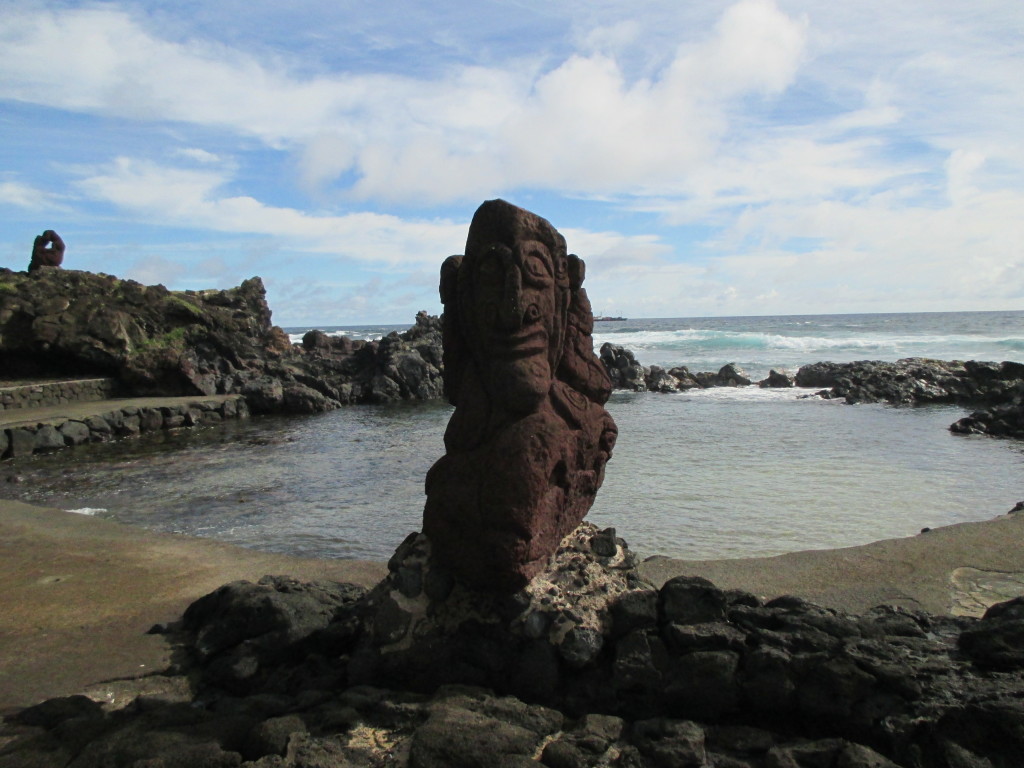 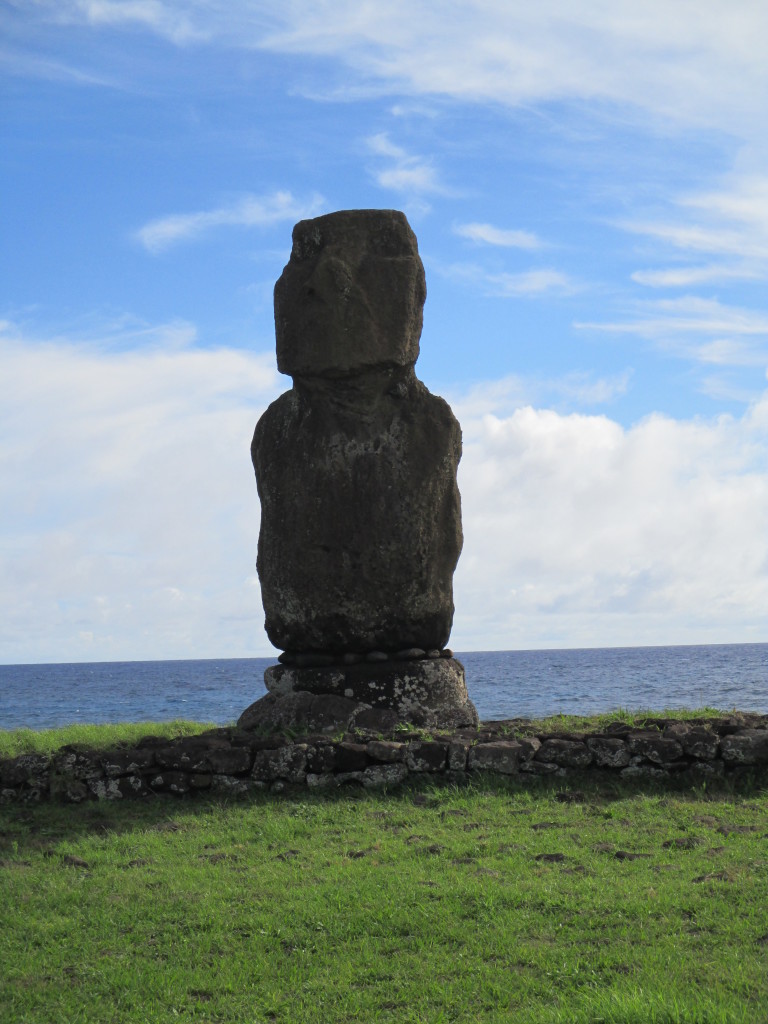 Coming face to face with my first moai was a rather amazing feeling, and as I followed the archeological path I was also pleasantly surprised at how tourist-free the place was: in fact, I was pretty much alone there. The coastal path was punctuated by outdoor gyms where you could do your fitness and body-building exercises facing the ocean and the statues… as well as herds of wild horses: 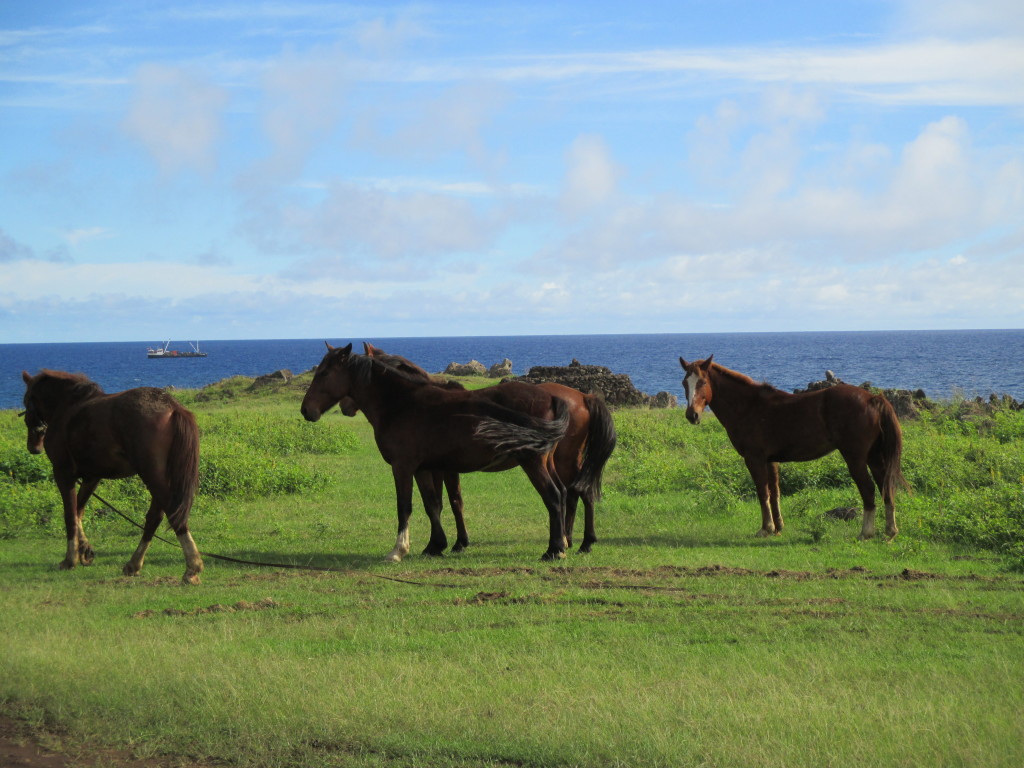 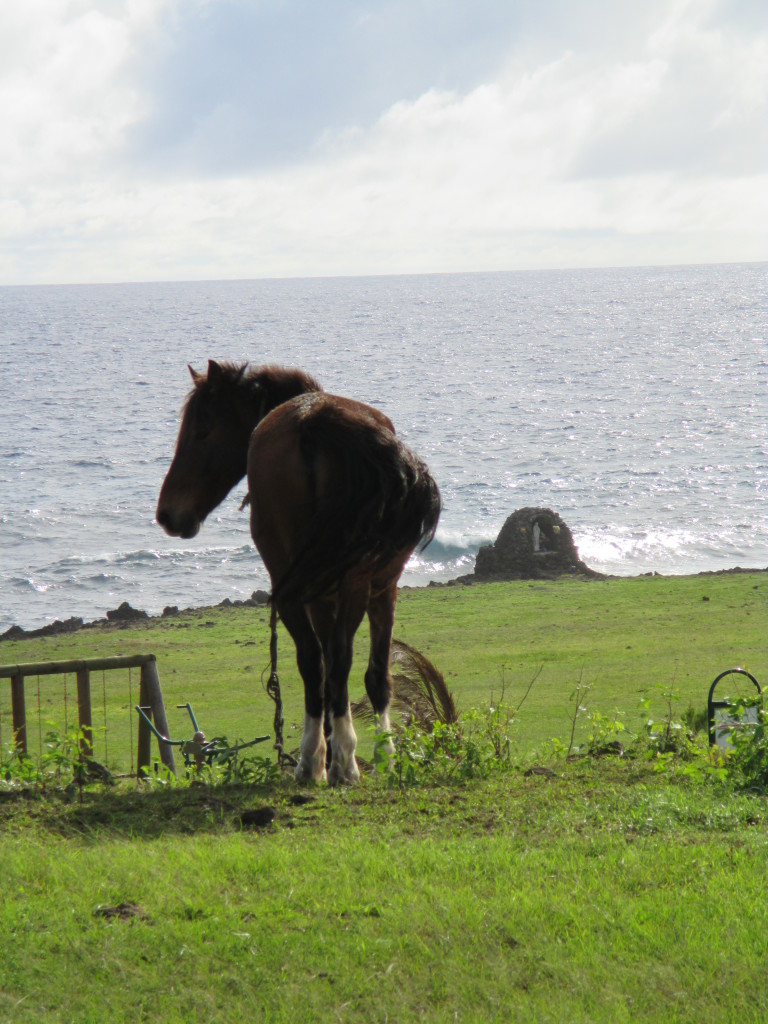 My hike took me to the Tahai site, which features a line-up of six individuals (well, four still standing…) and one of the few moai with eyes: 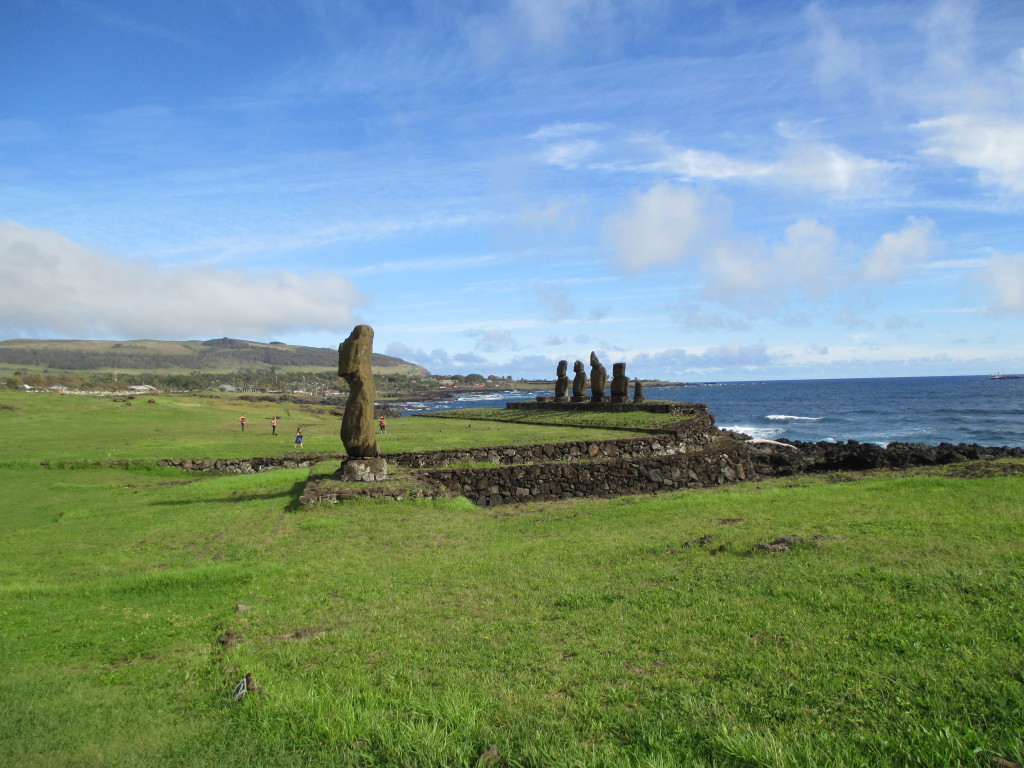 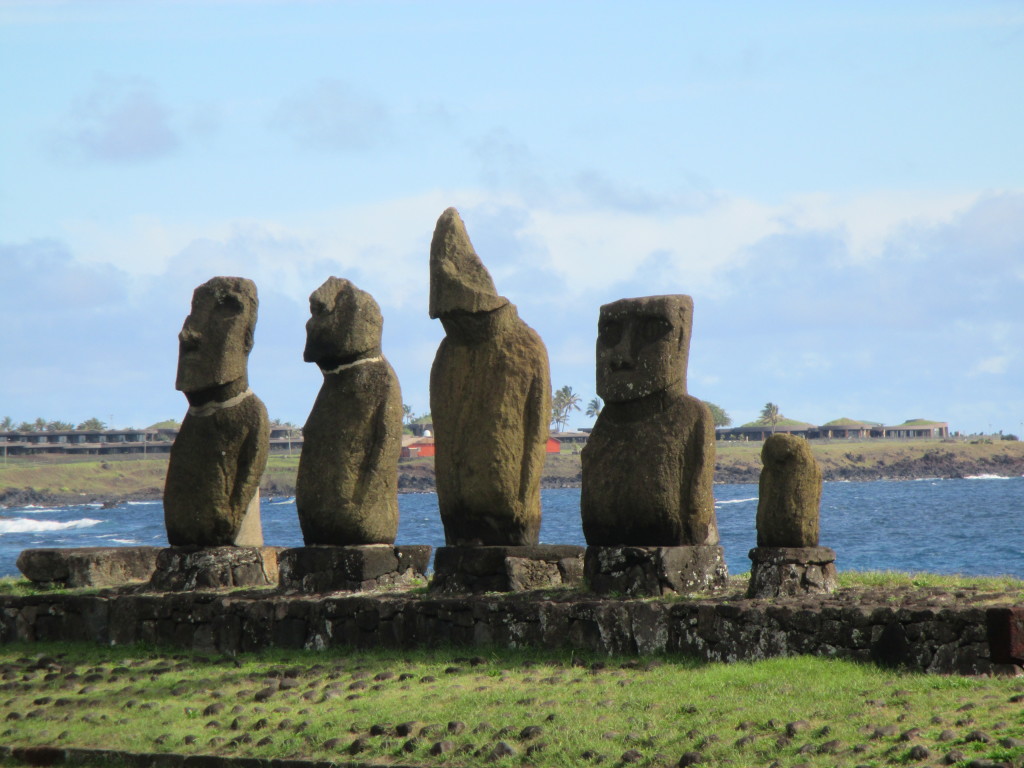 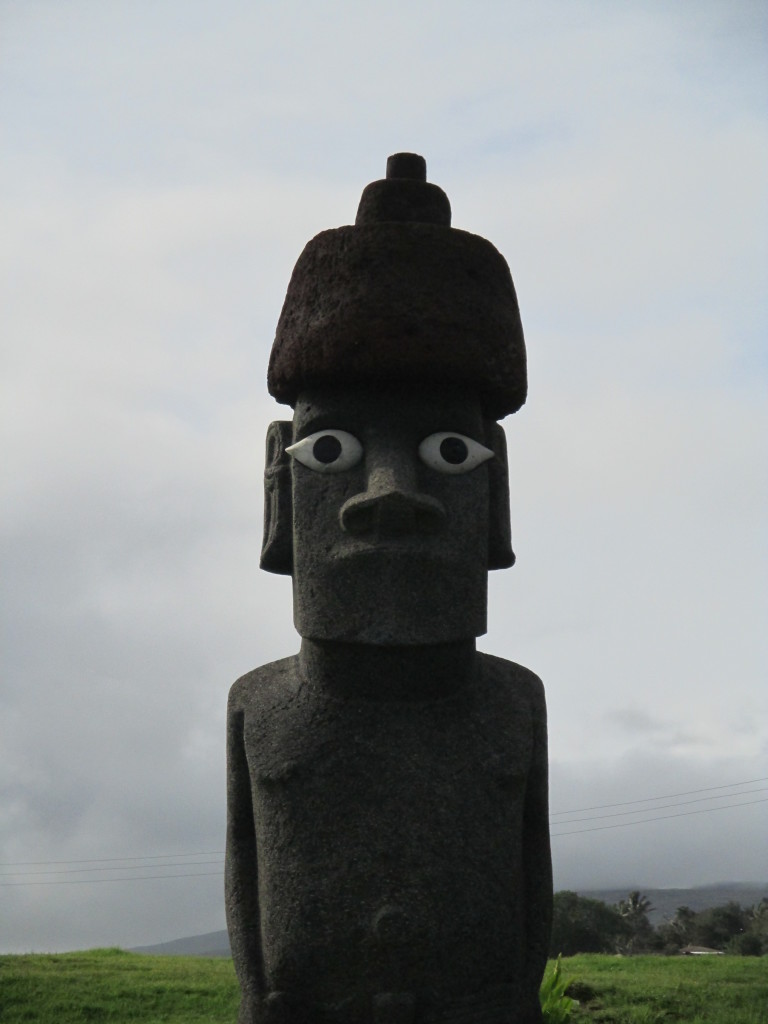 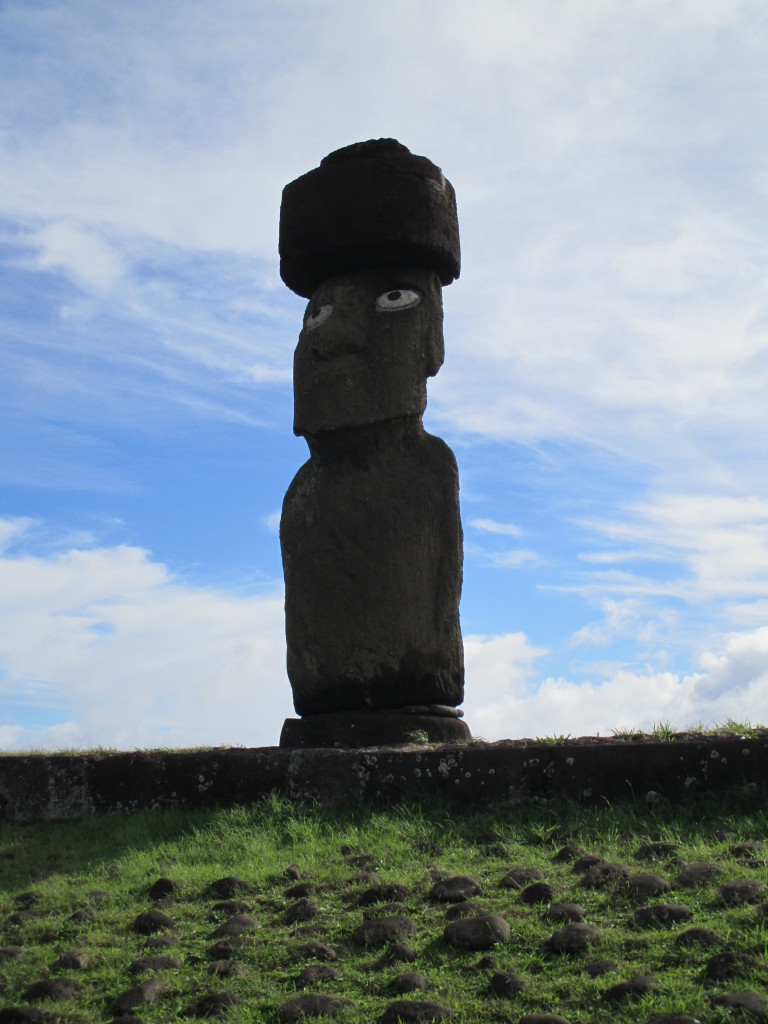 After walking for three hours, I turned back and regained my camping ground… where I suddenly realized I was about to drop dead and, embarrassingly, went to bed at 7pm..!

To be continued… check out the rest of of my Easter Island adventures in Part 2 .

Easter Island, bore or beauty – what’s your verdict so far? Have you always dreamed of going to legendary Rapa Nui? Let me know in the comments below!